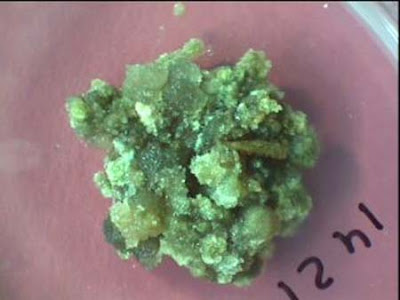 Studies of dynamic fractals (geometrical shapes that appear the same under magnification in time and in space) can help to describe the growth of things such as semiconductor films and tumors. Pictured here is a fractal plant growth. The name of the plant is Brassica oleracea or wild cabbage. The figure shows an undifferentiated tissue developed on an injured leaf.

(Courtesy of the Complex Systems Laboratory, under the leadership of Dr. Javier Galeano at the Technical University of Madrid.)

FRACTALS THROUGH TIME
A new theoretical study looks at what fractal things look like not just when you magnify them in space (they are scale invariant: they look the same even at finer and finer size scales) but also when you magnify them in time — that is, when you look at them over finer and finer time intervals. Fractals are those geometrical shapes so tortuously indented as to take on extra dimensionality. For example, a nominally one-dimensional curve can, with enough switchbacks, begin to be characterized by a dimension somewhere between 1 and 2. In other words the curve starts to take on the properties of a surface. Similarly a two dimensional surface can be so dimpled as to acquire some *volume.* This fractal geometry is especially interesting to consider for minerals and for certain living things (such as tumors) where highly non-Euclidean interfaces are important. In a new paper, Carlos Escudero of the Institute for Mathematics and Fundamental Physics in Madrid performs calculations of the dynamic scaling (how a surface changes in space and over time at several different scales) of
growing structures, such as the kind of semiconductor films used in the microchip industry where, even under the most carefully controlled of conditions, rough (non-Euclidean) geometries can exist. He found that the moment-by-moment behavior of the surfaces are strongly effected by the fractal geometry. Escudero will soon be testing his theories with colleagues in several practical areas of research, including the growth of tumor-like tissues in plants and the growth of semiconductor films.

(Physical Review Letters, upcoming article; at http://www.aip.org/png/2008/297.htm we've posted a picture of a plant tumor provided by the Complex Systems Laboratory at the Technical University of Madrid. )