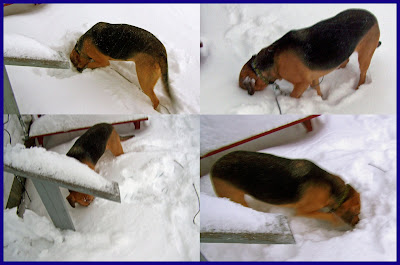 It turns out that my red squirrels love the peanuts that I throw out under the tree (please be sure to see the squirrel photos in those links — which open in a new window). The problem is that they are hiding them everywhere — in the snow. They hid several in the front of the house, where Sophie found them by digging in the snow. The dogs can smell a squirrel very quickly, so without seeing a squirrel, she knew something was under that snow. After finding the peanut, she would happily munch it before looking for another.

There was a heavy snow squall blowing while I took these photos. The wind was wild. Sophie was digging so fast that two of the photos are blurry. You can see the collage, full size, in a new window if you click on the image.

Often I take several photos of the same scene. Each photo may appeal to me so that I cannot choose which to post. But it can be boring for a reader to scroll down through all of the photos. A collage is the answer. In my quest to make collages on the Mac, I have finally decided that using ImageWell to place the photos, then Elements to edit the edges, then ImageWell for the frame is what works best for now. It is still a very clumsy method and I hope I find a Macintosh collage maker soon.