Heads or Tails: 243: A Map of the Republic of New Netherland << Strange Maps 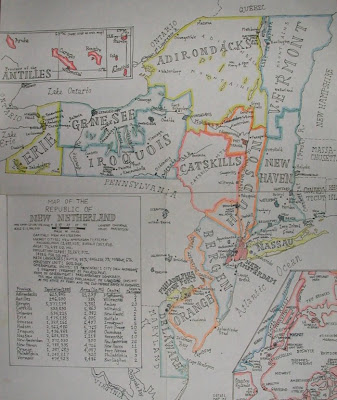 243 - A Map of the Republic of New Netherland

New Amsterdam never gave way to New York. The Dutch kept the whole of their North American colony out of the hands of the perfidious English, in fact. New Netherland today constitutes a thriving Republic stretching from the Atlantic coast to Québec, dividing New England from the rest of the United States.

This Republik van Nieuw Nederland is the brainchild of Paul Burgess, who’s been fleshing out its allohistorical details since his mid-20s – he’s even devised a pretty cool flag for the Republic, not to mention an anthem (’Onze Patrie’ – ‘Our Fatherland’), names for the baseball teams in the Knickerbocker League, a list of the best places to smuggle goods across the border to the US and even call letters for New Netherland radio stations. And, of course, this map.

Mr. Burgess’ fictional country has its origins in a PoD (Point of Divergence) in the year 1638, when not the irascible Willem Kieft, but the level-headed David Pietersen de Vries is appointed Director-General of the colony. De Vries pushes for colonisation, good relations with the Five Nations tribes, self-government and expansion and consolidation of the borders.

New Netherland achieved independence in 1798, after the ‘old’ Netherlands were overrun by the French. Philip Schuyler, the last Director-General of the colony, became the first Prime Minister of the independent Republic. Influential successors were PMs Maarten van Buren (1820-1856), and the Roosevelts: Theodore (1897-1919), Franklin D. (1930-1945) and Quentin (1948-1965), Theodore’s son.

The Landdag (Parliament) is comprised of the lower House of Burghers and the higher House of Peers.According to the 1980 census, New Netherland measures 71,288 square miles, counts 31,2 million inhabitants and is divided in 13 provinces, one city (New Amsterdam) and one freeport (Philadelphia). Most populous city is the capital, New Amsterdam (7 million). About 85% of the New Netherlanders speak Dutch, 9% English (mainly in Philadelphia, New Haven, Hartford and eastern parts of Vermont and Long Island) and 6% one of the Iroquois languages. READ MORE.

I have no idea how this relates to "Seven" but here 'tis.
I love the map and the history.