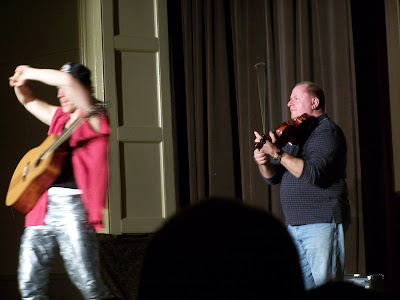 The Logger, Rusty DeWees (Facebook page here), was at the Barton Memorial Building for a show tonight. Amy had to drive because I have hurt my arm so badly that I cannot. Two big deer jumped into the road in front of us. Amy missed both of them. The hot pink walls of the auditorium are gone, replaced by this tasteful brown. I think I prefer the hot pink. His comedy is, of course, irreverent and coarse but it was in fun. He insulted every group he could possibly fit into the two hour show. 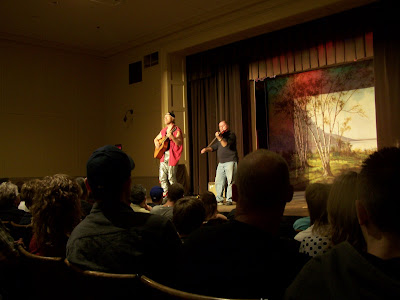 Here is Rusty playing with his friend whose name I missed because of my hearing problem. But the man was a wonderful fiddler. 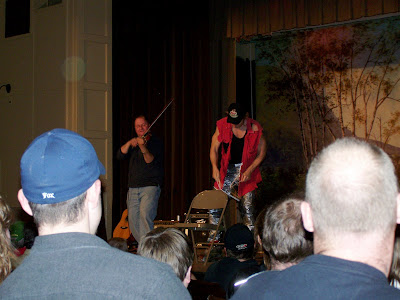 Rusty claims to be a drummer but played plastic clothes hangers on a chair since he had forgotten his drums. Soon after this, they held the 50-50 raffle and of all people, Amy won! That was exciting but with my bum arm, I couldn't get a photo quickly enough of her accepting the cash from the Memorial Building president. 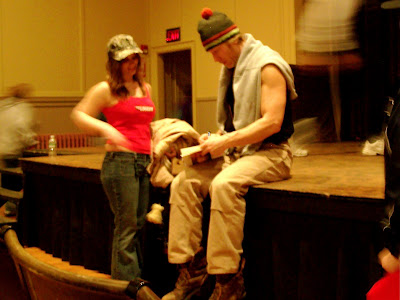 Above, Rusty is signing the clothing of a fan who had driven in from New Hampshire. I think about 200 people attended the show at $18 a ticket. 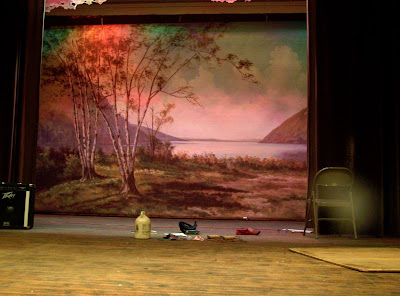 This is a poor photograph of the painted backdrop on the Memorial Building stage. I apologize for the poor quality. It is a view of Crystal lake from the northern end. It had begun raining in the village when we left. Of course, it is snowing up here.