Blog Your Blessings: The Winter of Chickadees 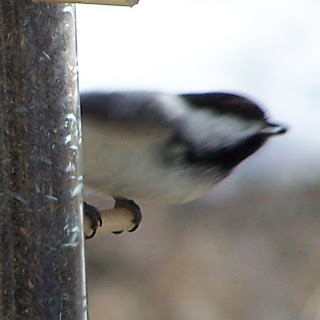 It has been a long time since I participated in Blog Your Blessings. It has been difficult for me to find a blessing during this long winter. But we all know that nearly all of us can find one blessing to be thankful for. I finally realized that the chickadees blessed me all winter.

These little birds are very bright, chirpy and friendly. When we went to refill the feeders, they would flock about us in the tree. When I opened the window to toss out bread or peanuts, they would fly to the tree to see what was being offered.

One window in my kitchen faces the back dooryard and Barton Mountain. There is open yard, then a small open field, then a buffer zone of tall, thick shrubs before the tree line at the woods. The chickadees seemed to live in those thickets of shrubs during the winter. They would fly one by one to the feeder. I observed them as they hopped in the snow for seeds, or waited in the bare branches for their turn to fly to the feeder. A dozen or more could be in the feeder tree, but they would only arrive one by one. Was this for fear of predators? Were they willing to sacrifice themselves to a hawk, owl or shrike should one strike from the sky and gobble them up? The others, the multitudes waiting to fly to the feeder, would be safe if one were lost. But if a predator appeared at the feeder, say a cat or a shrike, they would all fly off together in a cloud of black, white and yellow thrumming wings.

At the tree, they would shove their black-capped heads into the sunflower seed feeder and emerge with one good seed. Then they would fly to a nearby branch, hold the seed in their feet while they broke the hull with their beak, and gorge on that luscious kernel inside. When they finished with that seed, they would return to the feeder for another. They would never eat thistle and they would peck at the suet feeders. But they loved sunflower seeds more than anything else.

When I watched their lives out of my window and captured them forever in my camera, I didn't feel as lonely as I usually did during this past long winter. I was a part of something important. The chickadees don't rely on feeders to survive the winter, yet I felt as if I were important to them. The photo above is actually my last chickadee photograph of this winter feeder season. Ironically, it shows the last chickadee as it flew back to the woods for the summer. I can hear them now clearly from the house and my heart sings with happiness when I do. But I won't easily see them as they meld into the leafy canopy until next winter. The lives of the chickadees will be delightful during the warm months. I wish the same for myself during the remainder of this spiritually difficult year.