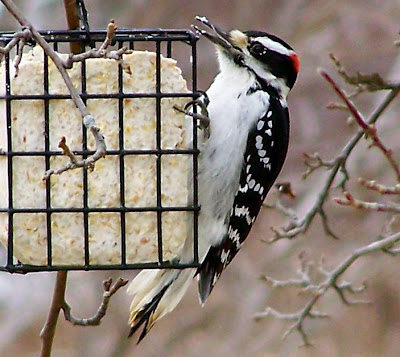 David at Useless Facts posted Useless facts: More on Brains — The Woodpecker Factor which pointed me to this article at New Scientist, which I have lifted in full because of the humor. I hope you enjoy my photos (I took these shots outdoors, not through the bird window) and information.

Question: How is it possible for woodpeckers to peck so hard without getting brain damage?

We haven't discovered more recent studies of the risks of brain damage in woodpeckers than those mentioned by Christopher Gardner-Thorpe, but further references from readers would be welcome. A brief description of the 1979 study, carried out by Philip May, Joaquin Fuster, Jochen Haber and Ada Hirschman, may be of interest. The researchers filmed a tame acorn woodpecker using a high-speed camera capable of recording up to 2000 black and white frames per second. Analysis of the film showed that the impact deceleration when the bird's bill struck the trunk was staggering, sometimes reaching as high as 1200g.

Perhaps not surprisingly, the woodpecker was also seen to close its eyes just before impact, in order to stop its eyeballs flying out!

With repeated decelerations of this magnitude, it's hard to see why the woodpecker does not immediately fall down unconscious, even given the factors mentioned above that help cushion the brain. The secret may be in how the woodpecker hits the tree. The researchers discovered that the woodpecker always keeps its strike absolutely straight. First, it would tap the wood lightly a couple of times to line itself up, and then strike repeatedly with great accuracy, never allowing its head to twist at the moment of impact. This means it avoids rotational forces on its brain, which tend to shear neuronal connections and cause concussion. These are the same forces that can cause serious brain damage to passengers in a car hit from the side in an accident or when a boxer is punched in the head.

The researchers go on to suggest that the woodpecker's approach could be used to help design crash helmets which reduce whiplash rotational injury. Indeed, we may have discovered this once already. The shoulder and neck casings on armour used by medieval knights look as though they were designed to prevent rotational concussive injuries when the wearer was being bludgeoned by a mace.

The researchers also point out that the woodpecker has a natural advantage in resisting brain damage. Its brain is quite small which means that the ratio of brain weight to brain surface area is also small. Therefore, a given impact deceleration force would be spread out over a relatively large area, making its brain better able to resist concussion than that of a human. — Ed 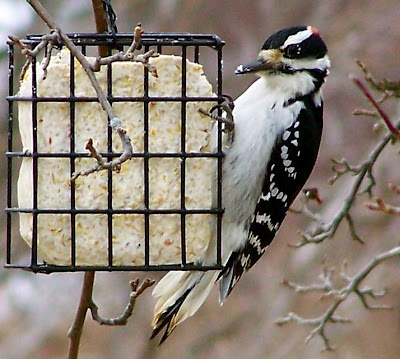 Answer: We have a picture of evolution in which life strives for, and tends to get closer and closer to, perfection. Perhaps a better picture might sometimes be one in which life manages to get by on whatever can be botched together just well enough to work.

For a bird to bang its face repeatedly against a tree looks like pretty dodgy behaviour, perhaps as dodgy as a mammal walking on its back legs while carrying things with its front legs. A woodpecker might get away with banging his head, just as I might get away with bipedalism. But I wouldn't be at all surprised if he was just as likely to get a headache as I am to get a bad back. 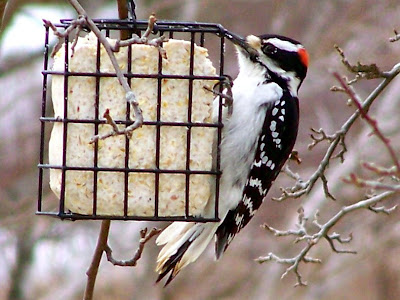 These photos will open full-sized in a new window when clicked.
To see more participants click