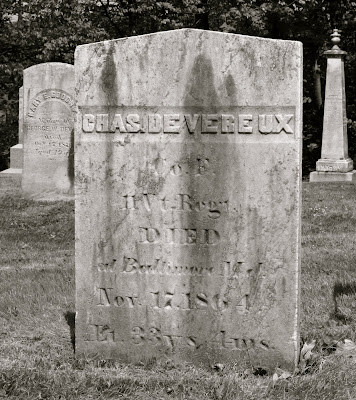 Photographed 24 May 2008
Charles Devereux was born in some unknown place in 1831. He enlisted in the Vermont Volunteer Infantry on August 6, 1862 in Barton and was mustered in on September 1, 1862 as a Private in Co. F of the 11th Infantry Regiment. He was promoted to Corporal on May 1, 1863. Charles was mortally wounded in action at the Battle of Cedar Creek on October 19, 1864 (with twenty-three other Vermont Volunteers).

The Battle of Cedar Creek was in Middletown, Virginia. Every single Vermont man in service in 1864 fought at the Battle of Cedar Creek. Charles's 11th Vermont Regiment served in the VI Corps of the Army of the Shenandoah commanded by Major General Philip Sheridan. They were in the 2nd Division, 2nd Brigade and were among the first sent into battle. The Army of the Shenandoah had 31,610 men and 90 guns in battle. Five hundred sixty were killed, 3025 were wounded, and 1770 were taken prisoner. The Confederate Army fought with approximately 21,102 men (exact figures are unknown) and 40 guns. Killed and wounded were 1860 people, and 1500 were missing at the end of the battle. All suffered horribly.

Charles died of his wounds in Baltimore, Maryland on November 18, 1864 — hopefully in a hospital. He was buried in Welcome O Brown Cemetery in Barton, Vermont, were I found his grave yesterday. There are no photographs, family, obituaries or memories of Charles anywhere except for his gravestone.

Many casualties, especially during the 1863-1864 campaigns, are probably buried in mass or unmarked graves, and their final resting place will never be known. There are also, in Vermont, many cenotaphs, or empty graves; some of these are not marked as such, but are a fitting memorial to the fallen solider nevertheless. 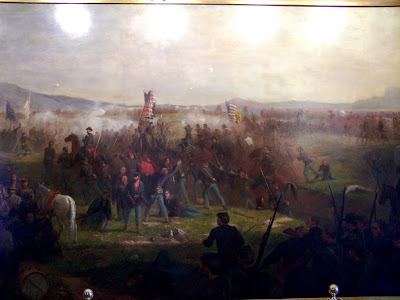 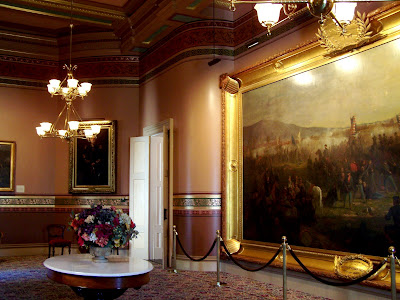 The Cedar Creek Room of the Vermont State House
References: