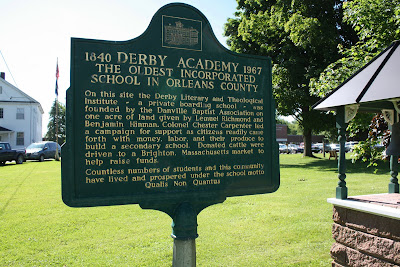 A sign marking the spot where the Academy (or high school) stood until 1957.

1840 DERBY ACADEMY 1967
THE OLDEST INCORPORATED SCHOOL IN ORLEANS COUNTY
On this site the Derby Literary and Theological Institute — a private boarding school — was founded by the Danville Baptist Association on one acre of land given by Lemuel Richmond and Benjamin Hinman. Colonel Chester Carpenter led a campaign for support as citizens readily came forth with money, labor and their produce to build a secondary school. Donated cattle were driven to a Brighton, Massachusetts market to help raise funds. 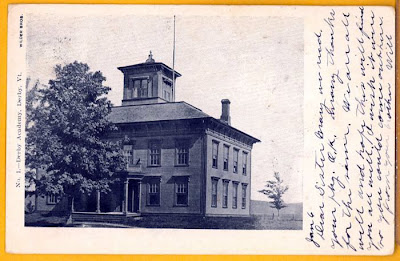 Jan 6
Dear Sister Mary we rec'd. your pkg. O.K. Many thanks for the jam (?). We are all well and hope this will find you all well. I wish it were s0(?) you could come out here. From your brother Will. 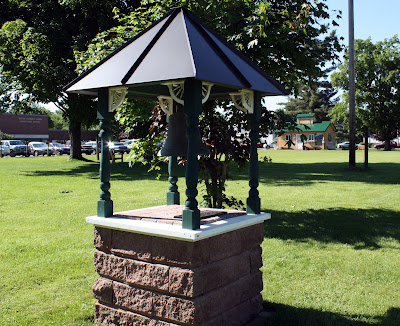 Behind the old Academy bell you can see the parking lot for the North Country Union Junior High School with a bit of the school beyond. You can also see a newer wooden sugarhouse with green roof that is an ice cream stand in the summer. 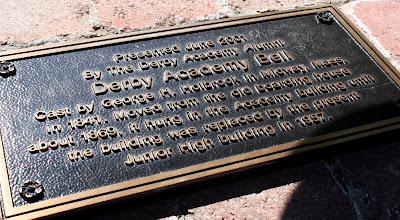 Presented June 2001
By The Derby Academy Alumni
DERBY ACADEMY BELL
Cast by George H Holbrook in Midway, Mass. in 1841. Moved from the old boarding house about 1869, it hung in the Academy building until the building was replaced by the present Junior High building in 1957.

Photos taken during the week of June 10 during inservice programs for district teachers at the junior high.