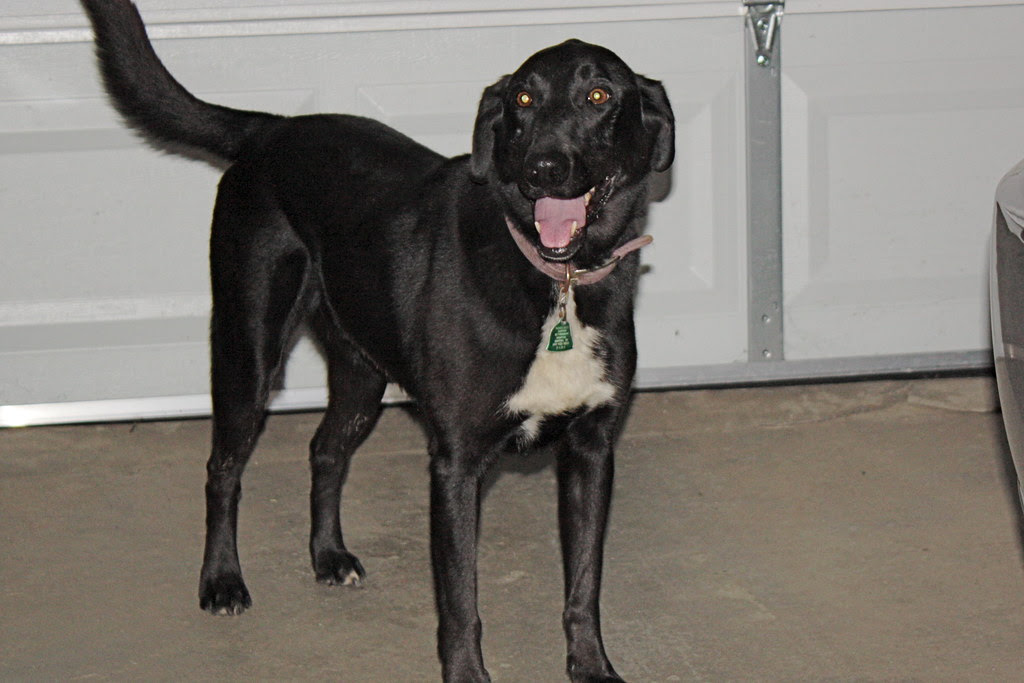 On the Saturday of the Caledonia Fair, Matt took me out to dinner. As we drove down Rt. 16 to Westmore, this dog was on the double yellow line chasing cars out of fear. We went over the next rise and waited to see if she would follow us. She did. So we put her in the car and asked the nearest farm if they knew her. They did — her name was Sadie and must have been spooked by the gunshots in the woods nearby. We went to Sadie's home but nobody was there. Sadie recognized her home but wouldn't even leave the car. Since the gunshots were continuing, we took her to dinner with us.

Sadie's folks were not home all night. We took Sadie to our home and she slept in the garage. Actually, she slept in Matt's car because he kept a window down and she jumped in! She ate some food he had mistakenly left there, also.

At 6AM Sunday I drove by Sadie's home and still nobody was there. Then Matt took her home at 8 AM and Sadie went up the long driveway without looking back.

Matt came home, stacked a cord of wood, took a shower and went back out to the garage. And there was Sadie, asleep on the backseat of his car again! She had come down Cook Road and Rt 16 and found her Matt.

Matt and I jumped in the car with Sadie and went to her home again. Finally her owners were home. They were glad to see Sadie but had never responded to the note (with our phone number) that Matt had put on their door! They had been in Island Pond overnight. Sadie had been in the garage when they left Friday but the doors had been open for air — just enough to let Sadie escape when she panicked.