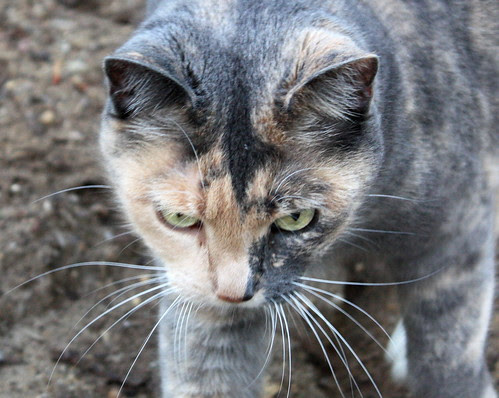 For the first time in her life, Possum (above) asked to go outside. And I let her go. She is in heaven here in New Hampshire in the gardens. She has taken to John quickly and had an easy transition. I think it is mostly because there are no dogs here to worry her. And the Bad Boys (Buddy and Charlie) are not worrying her because they are busy exploring their new world. 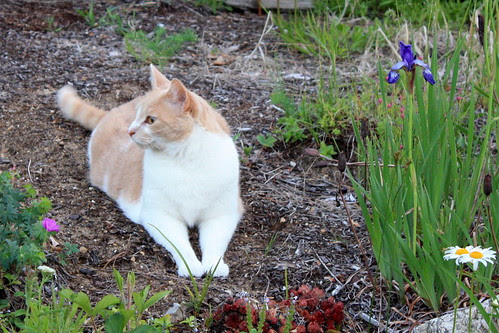 Charlie is in love with John. He sleeps with him, listens to him and chews on his fingers (it took Charlie two years to have a relationship like that with me). He has no problems living here. Charlie is killing. John said there have been a few headless mice around his truck. That is Charlie's signature kill — if he doesn't eat the entire mouse, he eats the head. Or simply chews the heads off. He also leaves the bodies about the car of the person he loves. 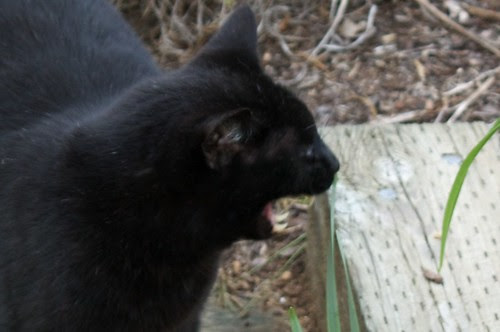 Zorro — a skittish cat in Vermont because of those dogs. He is relaxing daily now, conversing and interacting well with John and me. He comes and goes as he pleases. In the photo above he was chatting away with John in the garden. While there were, of course, chipmunks in Vermont, they were not on my land. We never saw them. But they are plentiful here. I see them standing on their haunches in the gardens when I let the cats out in the morning, or scurrying under rocks around the house. The cats are fascinated by them and I expect to see a couple of dead ones soon. The chipmunks set up a loud alarm whenever the cats are let out. 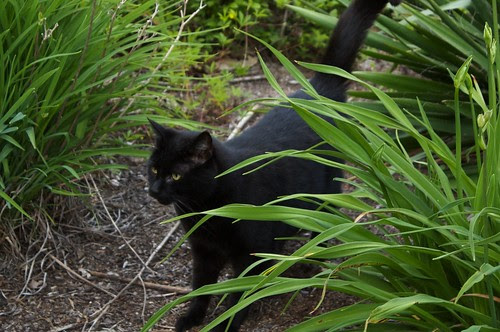 Turnip and Pansy are having a difficult time. Turnip came down with an eye infection the week before we moved. It has gotten worse here because of the stress. I debated bringing him until he recovered, but I realized that the stress of being left behind without his brother, Zorro, would be as bad as moving him. He has explored the house once but is mostly sleeping and is gradually getting better.

Pansy is an enigma. She is disabled with many birth defects but is stealthily moving about the house. She doesn't seem to have lost weight and is not growling or crying. Hopefully she and Turnip will integrate more as time goes on.