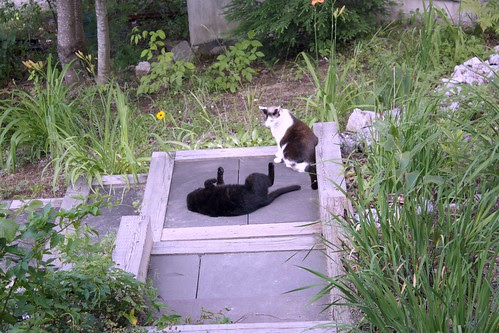 The cats have been going through their own grieving. They know what happened. Buddy, who walks everywhere outside with me, will never go with me to where Charlie died. Buddy was mute and nearly motionless for at least two days and had no interest in hunting, let alone going out.

For some reason, Zorro, who has never been top cat, is wooing Buddy. Knowing that Buddy is now top cat, Zorro will roll around submissively in front of Buddy, who will sit up tall and disapprovingly and occasionally bat Zorro's head. In bed, Buddy and Zorro, who had been sleeping together, have now separated to different spots. And with the other cats, Zorro is now shoring up his second banana spot by batting Turnip about if Turnip gets too chummy. Buddy's relationships with the others are unchanged.

Cats' lives are complicated lives as they wrest power and control from each other in order to grab a bit more for themselves.