Charlie never came home last night. I checked for him until midnight and then went to bed. I never heard his high, squeaky voice as he strolled home in the dark as his emerald eyes glow in reflected light. This morning he did not return for breakfast and I became worried. But Xavier and I went to the store hoping Charlie would be home when we returned. When we got back, John was still home, never having gone to work. I felt something was wrong then. And it was.

John had last seen Charlie last night at the wood pile, so when we went to the store, John tracked Charlie's last walk from the wood pile, into the woods, to the edge of the woods where the cat followed the tree line at the edge of the high field. And there in the corner of the field was Charlie's fur and a large area of matted grasses. There was a bit of blood, I saw, but not much at all. The coyotes (John counted two from the tracks) took Charlie across the field beneath an apple tree. There was a bit of fur there, too. There was nothing else.

Later in the afternoon, when I was ready, John took Xavier and I on Charlie's last walk. It was a healing walk amid the wildflowers in the fields as John explained to us what the tracks and grasses told us about Charlie's death. We followed the coyote tracks to the road, which they crossed to get to the Blackwater River.

The other cats had behaved oddly today before we knew what had happened to Charlie. They stayed close to the house. Buddy never went to his favorite field, the other field, to hunt. He was also poking in odd corners and behind furniture today — searching. The cats' sleep is broken and tense. John said they began to be nervous about 10pm last night. That is when Charlie died. That is when Charlie usually comes home for bed. 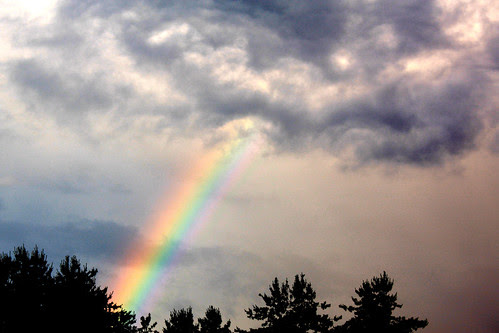 It is raining now. Thunder rumbles over our heads. The rain is comforting. We hope that your rainbow, Charlie, will appear in the sky later. We know you died so quickly that you probably never felt a thing except a brief flash of fear. We miss you, Charlie. We will never forget.