An Abandoned Quartz Mine 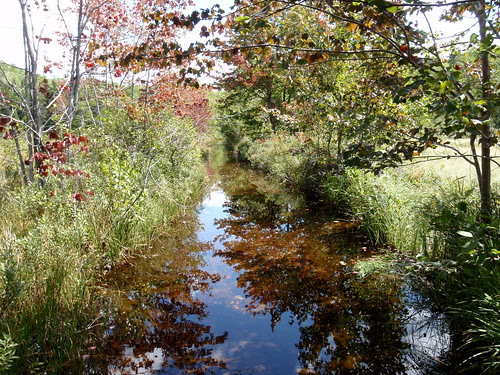 The first weekend of August we took a hike up to an old, abandoned quartz mine in Springfield. We are unable to find any history on these mines that were in the area but there were many of them. They mined quartz, feldspar and mica (like Ruggles Mine).


View Colabe Mine on Melvin Hill in Springfield, NH in a larger map

This was a short hike (half a mile up and half a mile back) (or 0.8 km each way), gaining 170 feet (51.8 m) of elevation. The old road began on Route 4A near Mud Pond. The lower trail at Mud Pond was flooded so we took off our shoes, rolled up our pants and waded through the warm water. The photo below is a good example of “black water”: water with decaying vegetation that colors the water brown but the water is clean for swimming. 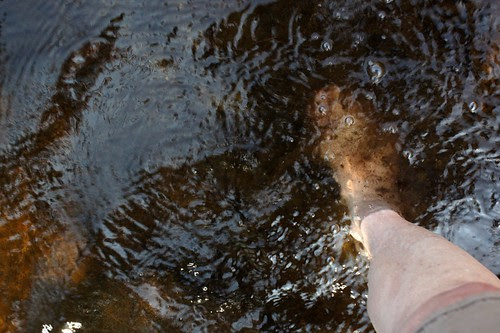 We saw trillium in seed and so much evidence of moose (scat, tracks and beds) that we were prepared to see one on the trail. Moose are so large that they don’t like traveling through the forest and would prefer using old roads and trails. Unfortunately we saw none. Finally we reached the top of the ridge and saw the trailings and clearings of the old mine. 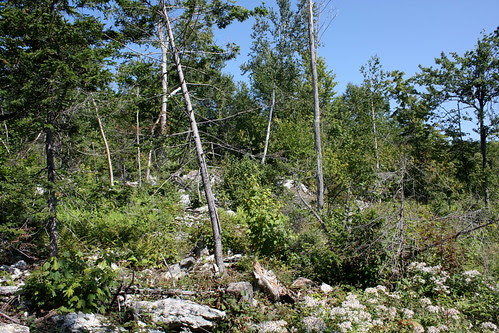 We found great specimens of quartz, garnets, mica in books, feldspar and even uraninite. Below you see a piece of quartz with green garnet crystals and mica. The blue of the mica is caused by the reflection of light. 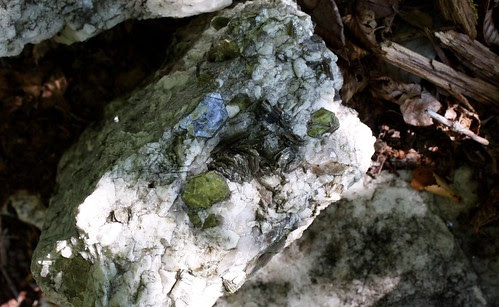 Below you see quartz with black uraninite — a uranium oxide, often called pitchblende, found in substantial quantities in quartz in New Hampshire. The gold colored mineral under the uraninite is feldspar. It is radioactive. 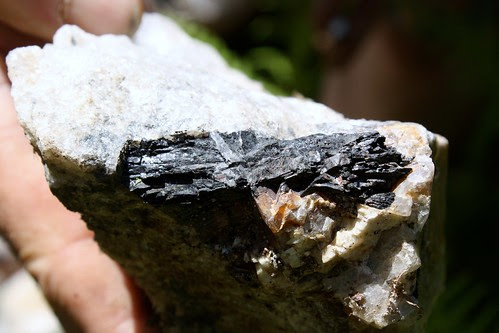 John & Wingnut continued to hunt for good specimens as I photographed them. 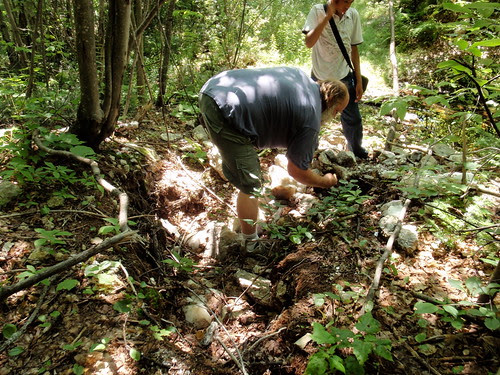 They found beautiful pieces of quartz: . . . and golden chunks of feldspar with mica and quartz: 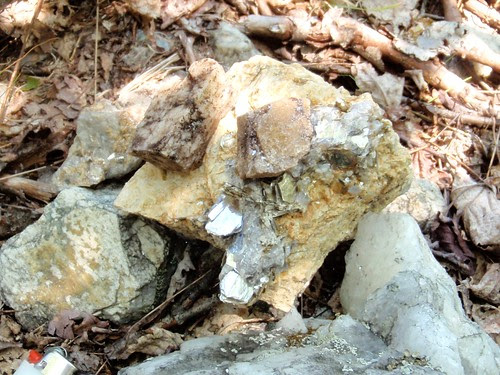 There was old, abandoned mining equipment rusting in the woods that have returned to the site. 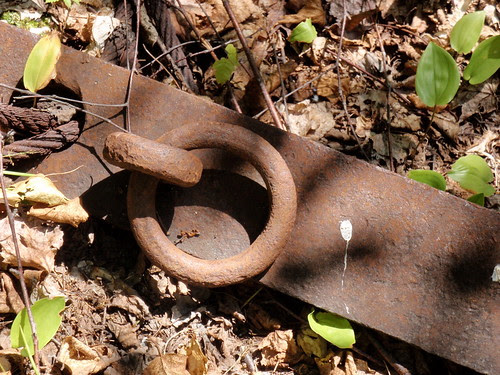 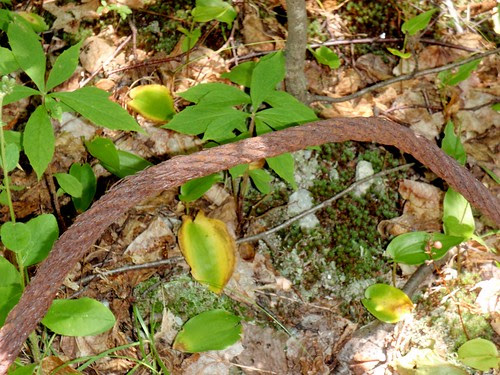 There were two beautiful quarry pits that were now flooded with water and full of fish and amphibians. There was ample evidence of wildlife in the area using the quarries for water and food. 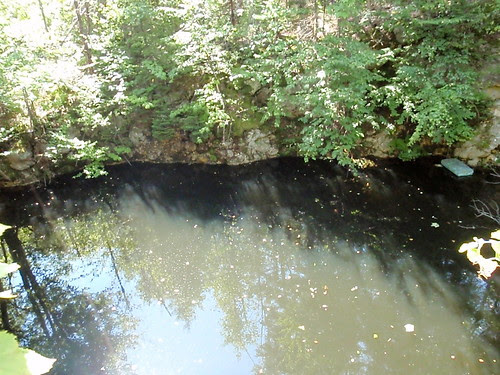 We found another pile of tailings, and as Wingnut explored it, John and I rested, shot photos and enjoyed the beautiful, hot summer day. 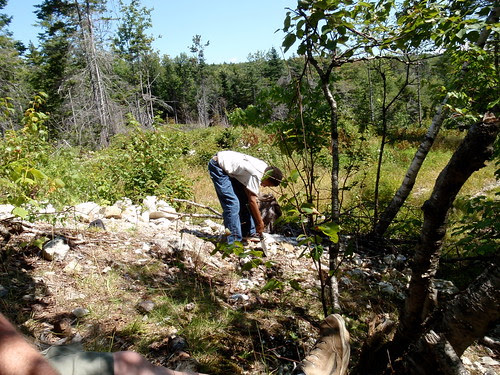 The woods were full of blue, ripe lily of the valley fruit. 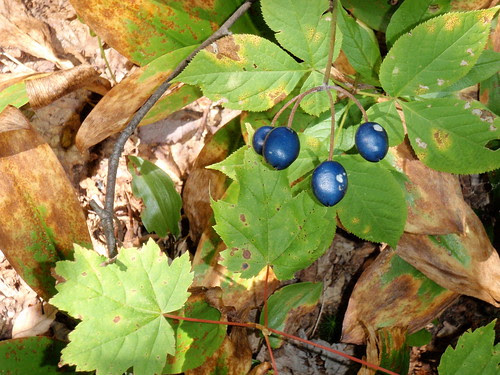 We believe this is the unripe lily of the valley fruit before it turns blue. 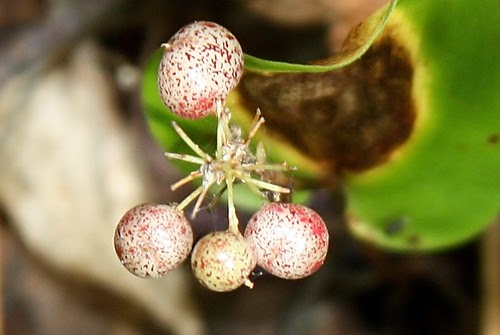 There were rare mountain ash trees. 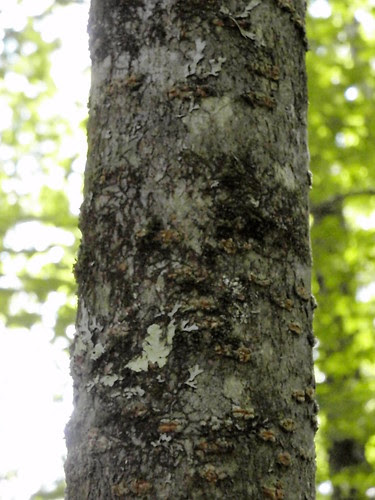 Finally we began our way back down the ridge to the car. We had many beautiful samples of rocks and minerals with us. 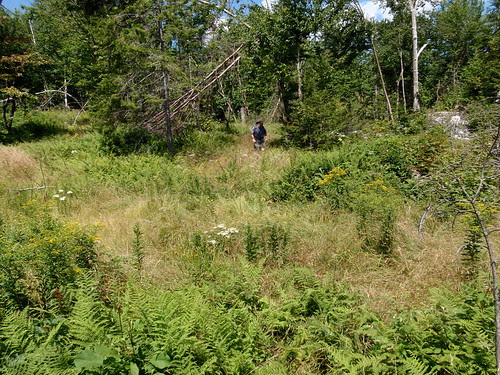 You can see many other photos of this hike in the Hike to Historic Quartz Mine Set on Flickr.
Technorati Tags: uraninite,pitchblinde,quartz,feldspar,mica,garnet,quarry,mine,mountain ash
_/\_/\_
Posted by Andree at 3:37 PM