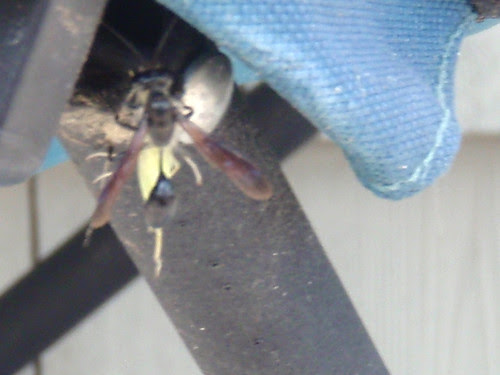 . . . I thought I saw a light-colored piece of straw about half a foot long “flying” horizontally and then hovering in midair. That caught my attention — I looked closer and saw a black wasp that seemed identical in form to a mud dauber, and it was carrying an object. I jumped up in my excitement, and the wasp was spooked and flew off. The proof eluded me, but it dropped its “prey” onto the porch. I picked it up — definitely a long piece of dry grass!

Expecting the wasp to return, I waited. After about twenty minutes it did return, carrying another piece of grass. This time I was ready with an insect catcher net, and I snagged the wasp along with the grass it carried. The wasp was about 0.6 inch long, and the blade it was carrying was about 2.4 inches long. The wasp looked superficially almost identical to the mud dauber, but its body was black rather than black-blue and its wings were smoky-colored instead of blue-black like the mud dauber's. It was a different species of wasp, which I later identified as Isodontia mexicana. I also learned later that rather than making clay organ-pipe cavities for its nest and filling them with spiders, this wasp lines preexisting cavities with grass and fills them with paralyzed crickets or katydids.

Heinrich’s wife had first noticed the digger wasp (which is the common name for the wasp he describes) carrying a blade of grass but Heinrich, the professional biologist, had dismissed her observation: wasps don’t carry grass.  Heinrich soon learned he was in error, as we read above. 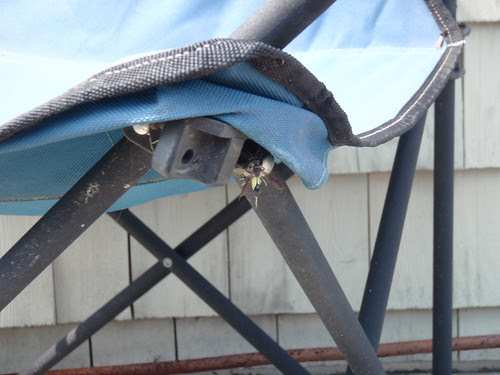 I remembered this section of Summer World: A Season of Bounty as I sat on our porch when a long, brown blade of grass flew near and then went into the tube of our folding chairs. Excited that I, too, saw the wasp, I got the camera, but found that photographing these wasps is difficult. Wingnut and I tried all summer and he finally got the shots of the wasp itself. Now I wish the tubes of the chairs were transparent and I’m thinking of asking John to make a digger wasp house of transparent tubes for next summer.