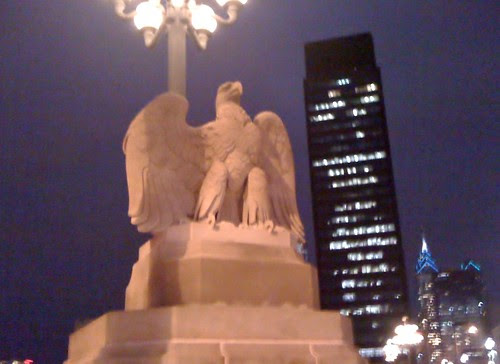 An iPhone photo from Andrew when he was in Philadelphia this past week
This eagle statue is from the top of the original Penn Station in New York City that was demolished to build Madison Square Garden. The eagle statues from the old station were sent to many places (see below). There were twenty-two eagles originally standing on the top of the old station in New York. Four of them are now on a bridge next to the train station in Philadelphia. One is at the National Zoo in Washington, DC. This one is on the Market Street bridge near the 30th Street Station in Philadelphia. The old Penn Station in New York was beautiful. Its destruction angered so many people that it became the catalyst for the historic preservation movement.

Only three eagles salvaged from the station are known to remain in New York City: two in front of the Penn Plaza / Madison Square Garden complex, and one in the new academic building of The Cooper Union, Weinman's alma mater. Cooper's eagle used to reside in the courtyard of the school's engineering building[17], but was relocated in the summer of 2009, as the school has moved out of the structure at 51 Astor Place. This eagle is no longer viewable from the street, as it is located on the building's green roof. Three are on Long Island: two at the United States Merchant Marine Academy in Kings Point and one at the Long Island Rail Road station in Hicksville, New York. Four reside on the Market Street Bridge in Philadelphia, Pennsylvania, across from that city's 30th Street Station. One is positioned near the end zone at the football field of Hampden-Sydney College near Farmville, Virginia. Yet another is located on the grounds of the National Zoo in Washington, DC.