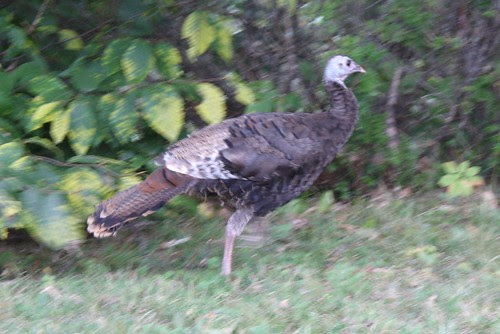 As we approached the driveway one afternoon in September, we saw our flock of turkeys across the road. I had no time to compose a good photograph — I could only point and shoot without focusing.

John says that one morning this week at about 5 AM Buddy woke him up by batting his head. John then saw, in the dark, all four cats in the bedroom windows. All were very excited. The flock of turkeys, which have been absent for a couple of weeks now, had returned and were gobbling quite loudly. It isn't a good thing for cats to try to catch turkeys, so instead of letting the cats out, John went back to sleep.