The Crystal Lake Falls Historical Association contains the text of a conversation with Raymond L. Paquette, Sr., a resident of Barton, in which he recalls the history of the granite quarries on Barton Mountain. Below you see the area that is spoken about. Below this image is a tighter image that shows my location on Barton Mountain in reference to these sites. 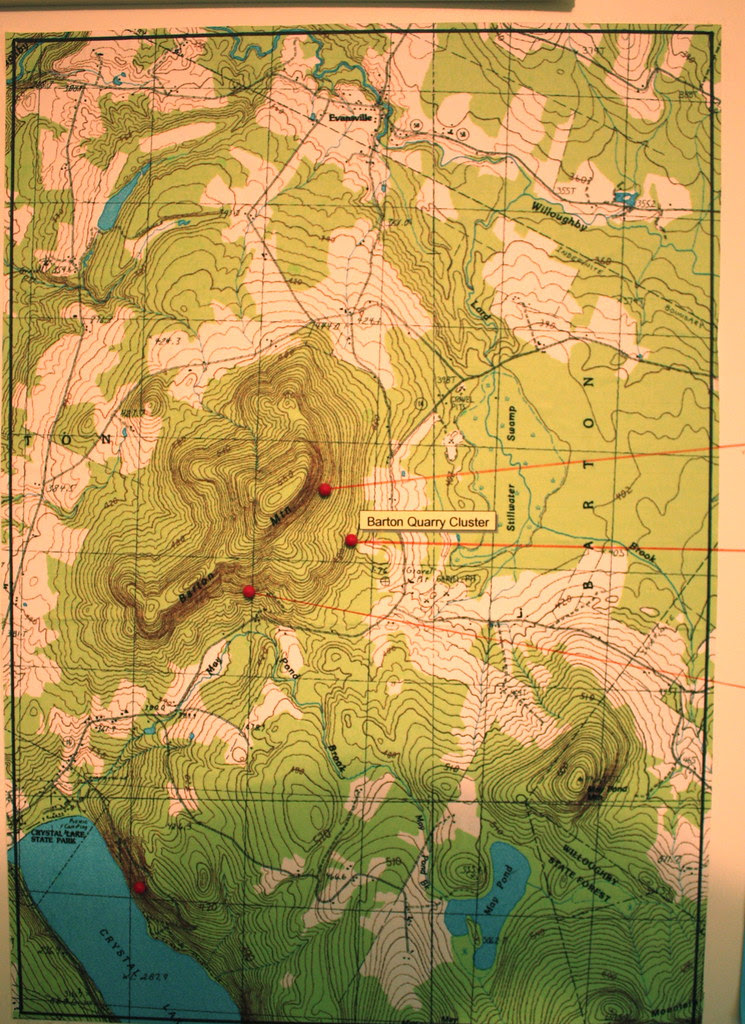 The altitude is in meters. The conversations below refer to the red push pins on the map. #1 is the bottom red pin, 2 is middle red pin and 3 is the upper red pin. 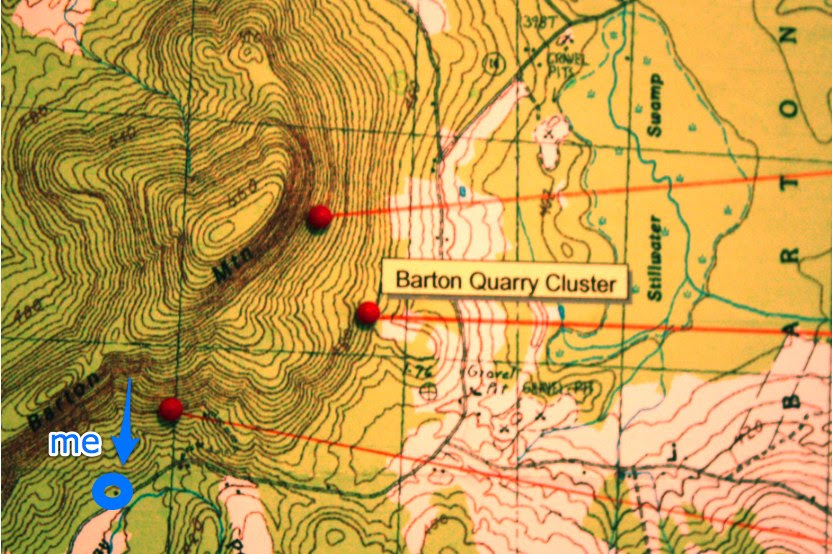 The text of the conversation with Mr. Paquette about the Barton Mountain Granite Cluster:

#1: John Barnard's Quarry "John Barnard's farm had falls on May Pond Brook, a grist mill for power, and four barns. across Route 16 and up Barton Mountain, John Barnard had a granite quarry. Later, Ryle Miller built a house on the grout pile at the Barnard Quarry."

#2: Pete Damon Quarry (on present-day Labrecque farm) "Pete Damon had a granite quarry. 1915 or later. Knew his granite. He built a lot of granite bridge underpasses for the cows to go under the road. The Labrecque farm had one and the Michael farm has one." "When I owned the present-day Michael farm there was a granite water tub in the old milkroom that was built by Pete Damon. The granite in that tub was four inches thick."

#3a: Harry Fisk Quarry (on present-day Michael farm) "The quarry covered four acres. A granite company had a four-year lease. They worked four years and then, gave up. A man named Ferguson worked this quarry after the company left. He worked alone and did hand-work only. They brought the granite to South Barton."

In the early times, almost all of the granite was cut by hand. Route 16 was dirt back then. When the granite was brought to South Barton, they used what they called 'shoes' to trig the wheels of the wagons that were loaded with the very heavy granite. These 'shoes' were made of cast iron at the Markland Company which was located on Water Street in Barton."

"In the 1920s, Richard Ryan made the gravestone for my little sister who is buried in St. Paul's Cemetery in Barton.

"In 1946, I bought the Fisk farms which consisted of three hundred and sixty acres of land. I used the electricity from the Fisk Quarry."

The Granite Quarries of Barton Mountain Part 1
http://meeyauw.blogspot.com/2010/05/granite-quarries-of-barton-mountain.html
Posted by Andree at 7:30 PM