The backhoe, above, is vital to restoring the buried stream beds that are flooding the hillside, barn, yard and even the road. I'm fascinated by all of the hoses on the back that make the backhoe work. 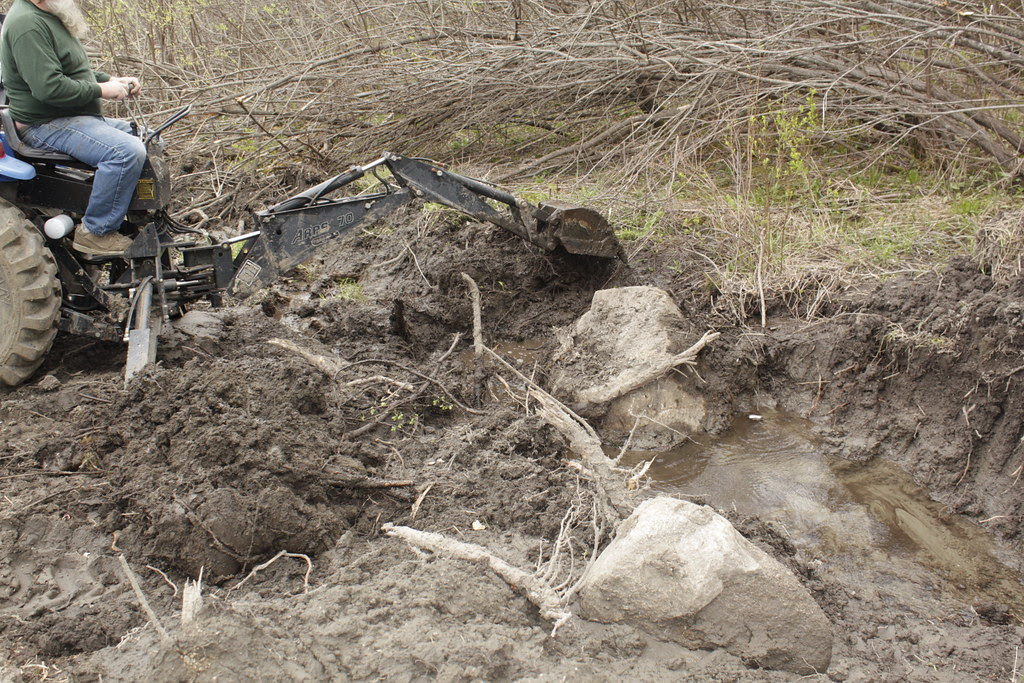 There are at least two brooks here that come off of Barton Mountain. Decades ago, as the land here was developed for farming and building the house and barn, the brooks were simply buried or diverted without thought to the action that water has over time. If the water action is not considered, the brooks go underground and seep out everywhere. The land adjoining our acres was slowly becoming flooded so that you have to put on waders to pick apples from the trees. Willows and alders grew abundantly in the wet ground and created a fine mesh of roots that further buried the brooks.

The first step in restoring the brooks is to brush hog the willows and alders. You have seen this in previous posts. As the land was cleared and began to dry, it was easier to see how the water flowed as it appeared and disappeared here and there in its travel down the mountain. Culverts that were installed long ago had become full of mud and forest litter. Once the culverts were cleared, the water drained better, but still was not flowing in its original stream bed. 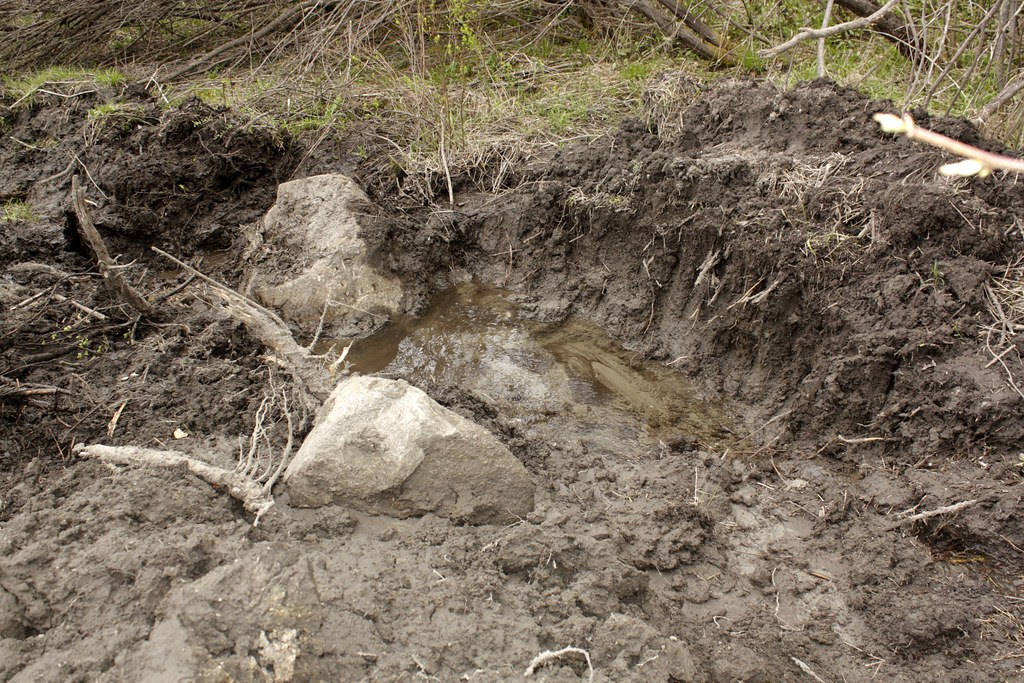 In the photograph above, John has finally reached the gravel of the stream bed. There are huge rocks there. When the brook is restored, there will most likely be a nice pool here. The water is running clear. 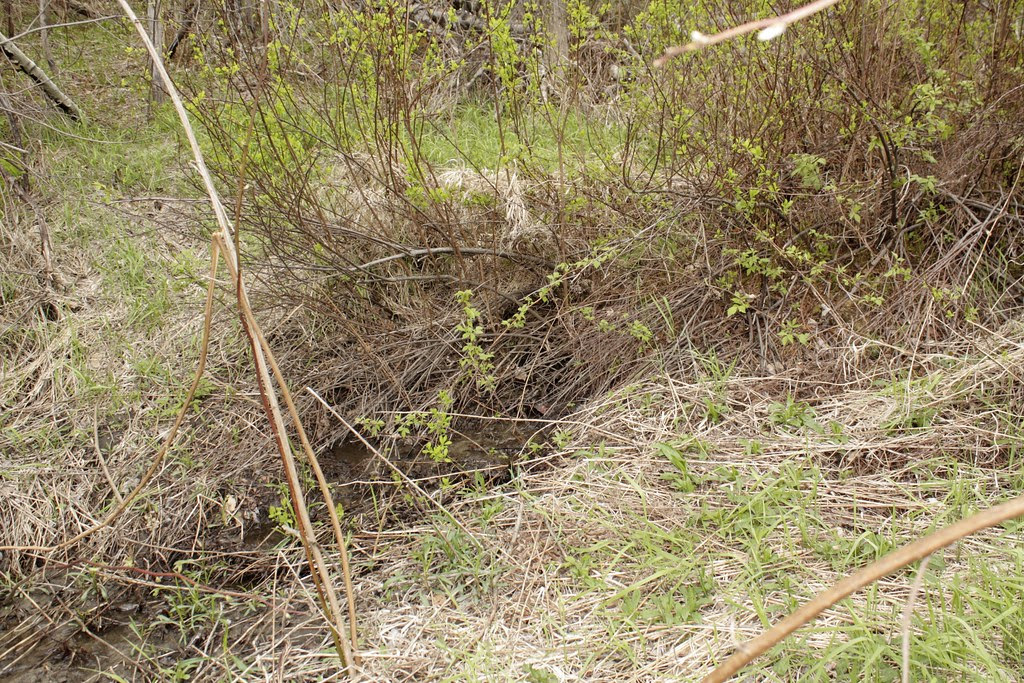 Above, you see the brook as it comes out from underground. There are blackberry and raspberry canes growing over the brook. Above: another brook. Up in the woods, this brook flows over and under glacial erratic boulders that animals use for shelter. The pools and the gurgling water have been one of the things I love about this land. Buddy and I have gone up for years to enjoy the water. But down below near the house, the willows and alders have buried the brook. John has been clearing it away so that the water can flow the way it was meant to flow.

Below: behind the backhoe you can see a mass of brown roots growing over the brook. Willows grow roots like this. They cover the brook, submerging it. But the roots are always dangling in water. This is a very effective survival technique for the willows but not for the brook. And finally, below, you can see that the water can now flow more freely. The volume of water increased greatly after the willows were cleared. It makes one wonder where the water was going underground. 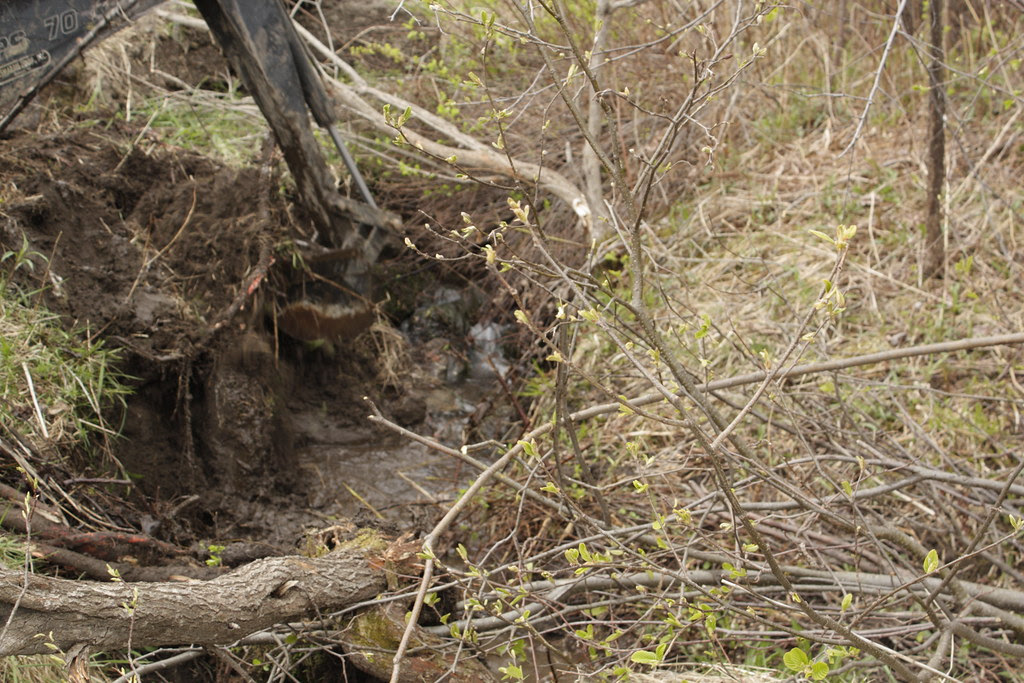 Obviously, there is a lot more work to be done. But it has begun and the changes in the land are tremendous.
_/\_/\_
Posted by Andree at 3:12 PM