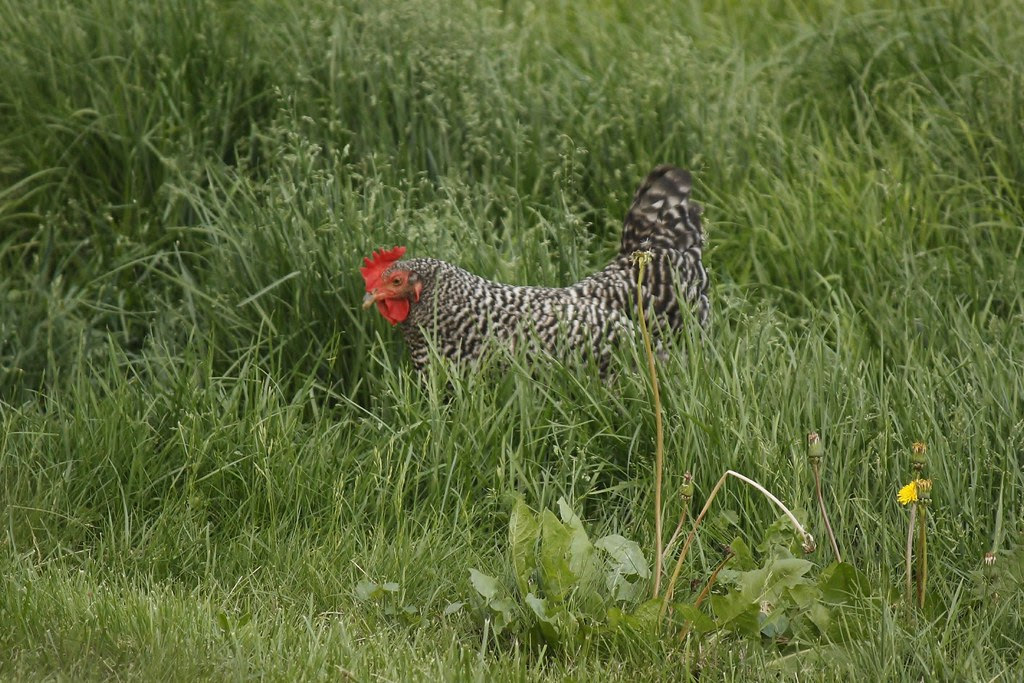 On the Saturday night of the women's retreat, Amy and Nate went out for the evening. The chickens always put themselves to bed, but the days are longer, and they hadn't retired to the coop before the kids left for the evening. Now this has happened before, and the kids have always gotten back fairly early. But this night was different.

At 10 PM, I went out to the garage to count cats to make sure they were all in for the night. The garage was closed but I heard loud chicken clucking. The chicken wasn't in the barn — which is very bad. I ran to the stairs and called out to John, who had gone to bed earlier. Then I grabbed a flashlight, a very poor flashlight, and ran outside. I knew that it would be a couple of minutes before John would be able to get the rifle and get outside to get the raccoons and I wanted to stop any more massacres.

The panicky, clucking chicken was in the driveway in front of the garage door, under the outside light which was on. She was pacing back and forth as if waiting for the garage doors to open so she could get into the house. I ran up to the barn. My plan was to shine the flashlight into the barn and holler, which would hopefully slow down or stop the raccoons.

I shined the inadequate light into the open barn from where I stood outside and an unholy scream broke out. I began to scream. At the same moment, John came out the garage door with the rifle. I stumbled towards the house as John came towards me. He hollered at me for screaming and scaring the animal in the barn. I got back to the garage and waited with the chicken.

She was still clucking wildly and pacing in front of the garage doors. Occasionally she would stop her clucking, cock her head and listen to a scream that we heard on the mountainside. As soon as the scream would end, she would throw herself into the air and try to get into the garage through the sealed garage door windows. She left the imprint of her wings and feathers on the dusty glass of the windows.

John returned and said it was not a raccoon that had been in the barn — it was a fisher cat. He said I had been very foolish to go to the barn unarmed when I knew that was trouble in there. There could have been a bear or bobcat in that barn. Or a raccoon. But this time it was a fisher and I had put myself in danger with what I had thoughtlessly done. John was furious with me. I realized that he was right and apologized.

The screaming on the mountain from the angry fisher cat continued for awhile and faded away. But the chicken was not calming down or going to her roost. We opened the garage door and the noise scared the chicken into the barn, where we managed to herd her into the coop. All this time, the cats, who could have gone outside through the garage, and the dogs, who always bark at excitement outside and could have jumped through the screens on the window, were completely quiet and stayed in. They recognized the cry of a fisher cat and were not going to antagonize it further.

It was midnight before the chickens were in bed for the night and John and I could return inside. The kids got home around 1 AM, when I told them the whole story. Thankfully, the repairs to the chicken coop that Nate had made had held and everyone was safe.

Since that time two weeks ago, John has seen the fisher cat prowling the land at night. The raccoons tried to get into the coop one more time. I heard wild clucking again one night. By the time everyone got out to the coop, there were no threats to the chickens in the barn. But there was a lot of blood on the chicken wire over the window. The raccoons had tried to chew through the wire and gotten badly cut.

We are in the process of dismantling the falling down barn and building a big, secure coop.