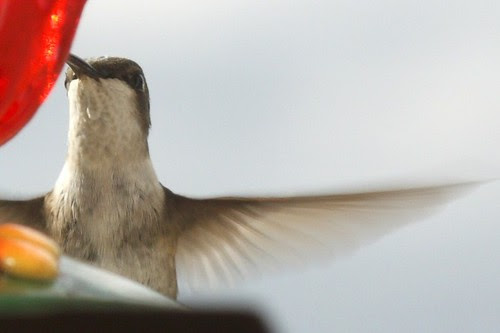 This was to be the summer of my hummingbird photographs. I have windows in the Barton house that lend themselves to photographing birds. So I got more hummingbird feeders and put them on the bird tree and on the windows. I washed the windows, learned what settings I would need on the camera by taking some practice shots and waited for the hummers.

I got hundreds of photographs of the male hummingbird and they are all bad. On the first day of shooting, I found that there was an errant cat hair on the outside of the window that showed up on each photograph and could not be cropped out. I could have photoshopped it out but didn't.

After that problem was fixed, I got hundreds more photographs of the male. Backlit. I had to heavily edit the photographs just to see the bird and the photos were not good. I published the furry photo and the backlit photo anyhow because they documented my evolution in hummingbird photography. You can view them here and here. 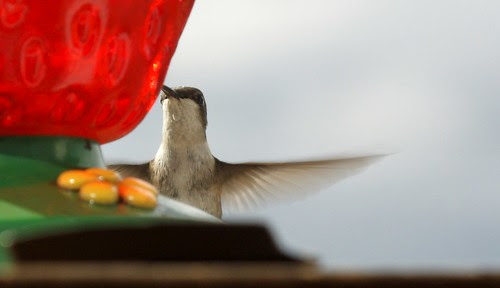 I found that the female Ruby-throated hummingbird (the only species that appears in Vermont) is much more skittish than the male. If I made the slightest movement, such as sighing, she would see me through the window and dash off. So I had to sit, by the computer, with my camera ready to go, lens cap off. Even so, I was  only able to photograph the male while sitting in my chair close to the window, never the female.

Then one day, as I happened to be walking onto the sun porch with my camera in my hand, the female was at the feeder. I stopped, and from across the room with a 250mm lens, I photographed her. I got many lousy shots, but I also got these that I published on meeyauw's Photo A Day. I waited many days at the door to the sun porch for her to return, but she never appeared when I was waiting. 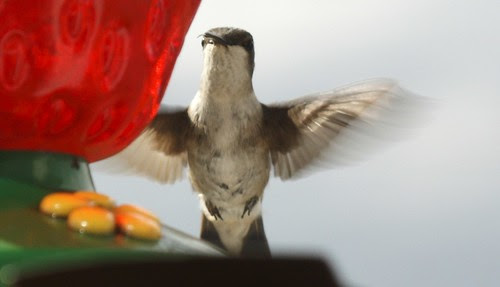 I saw hummers on the bird tree a few times, but I was never prepared to take their photograph. And on the occasions when I was prepared, they did not come. So I took my camera outside and waited for them at a suitable distance from the feeders. I missed many wonderful shots, including a fight between two male hummers. I had problems with lighting all the time. The feeders that attracted the most hummers (or the same two hummers that returned constantly) was on the south (sun porch) side of the house. The sun was always wrong for me there. But I did manage to get these photographs that you see here. I couldn't crop them any better than what you see. 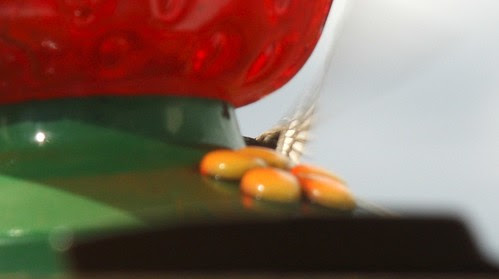 I like these photographs because they show the details of the wings better than the beautiful hummingbird photographs that I took You can see the female hummer (these are all of the female, who does not have the red throat) back-winging in order to hover. The feathers are splayed at different distances and angles depending on how she wants to move. People are fascinated by hummingbirds because of their powerful flying ability. They also have a ferocious spirit which I find inspiring.