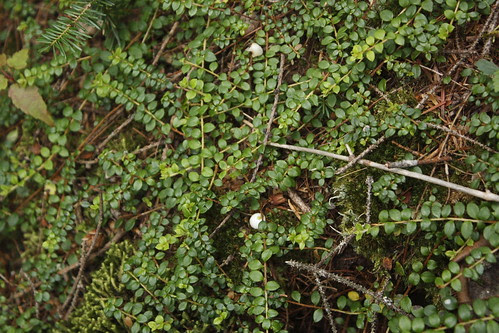 These are “Ocean Spray cranberries” — the wild, native berries found in bogs throughout northern North America. You can see two white berries in this photograph. All cranberries begin white and become red as they ripen. These wild berries are exactly like the Ocean Spray berries you buy for Thanksgiving. The Willoughby Bog is covered with cranberry plants. In fact, they sometimes obscure the other bog plants.

Ocean Spray has a wonderful list of Fun Facts about cranberries:

• The cranberry is one of only a handful of major fruits native to North America. Others include the blueberry and Concord grape.

• The cranberry gets its name from Dutch and German settlers, who called it "crane berry." When the vines bloom in the late spring and the flowers' light pink petals twist back, they have a resemblance to the head and bill of a crane. Over time, the name was shortened to cranberry.

• During the days of wooden ships and iron men, American vessels carried cranberries. Just as the English loved limes, American sailors craved cranberries. It was the cranberry's generous supply of vitamin C that prevented scurvy.

• Native Americans used cranberries to make a survival cake known as pemmican. They also used the fruit in poultices and dyes.

• Dennis, Massachusetts was the site of the first recorded cranberry cultivation in 1816.

• Legend has it that the Pilgrims may have served cranberries at the first Thanksgiving in 1621 in Plymouth, Massachusetts.

• During World War II, American troops required about one million pounds of dehydrated cranberries a year.

• The hearty cranberry vine thrives in conditions that would not support most other crops: acid soil, few nutrients and low temperatures, even in summer.

• It takes one ton or more of cranberry vines per acre to plant a bog.

• Depending on the weather, cranberry blossoms last 10 to 12 days.

• Contrary to popular belief, cranberries do not grow in water. They are grown on sandy bogs or marshes. Because cranberries float, some bogs are flooded when the fruit is ready for harvesting.

• If all the cranberry bogs in North America were put together, they would comprise an area equal in size to the tiny island of Nantucket, off Massachusetts, approximately 47 square miles.

• Cranberries are primarily grown in five states — Massachusetts, Wisconsin, New Jersey, Oregon and Washington. Another 5,500 acres are cultivated in Chile, Quebec, and British Columbia. There are nearly 1,000 cranberry growers in America.

• The 1996 harvest yielded more than 200 billion cranberries — about 40 for every man, woman and child on the planet.

• In 1996, cranberry growers in the United States harvested 4.84 million barrels of fruit, according to the U.S. Department of Agriculture. End to end, that many berries would span more than 1.75 million miles. Did you know that there are 440 cranberries in one pound? 4,400 cranberries in one gallon of juice? 440,000 cranberries in a 100-pound barrel?

• Seven of 10 cranberries sold in the world today come from Ocean Spray, a grower cooperative started in 1930.

• If you strung all the cranberries produced in North America last year, they would stretch from Boston to Los Angeles more than 565 times.

• Cranberries are sometimes used to flavor wines, but do not ferment as naturally as grapes, making them unsuitable for the traditional winemaking process.