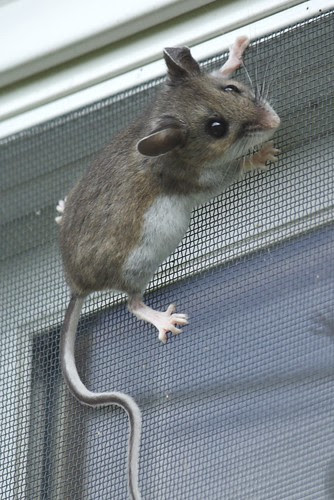 On a sunny August morning, a deer mouse suddenly appeared on the outside of the porch screen! The cats knew it was there before we did. We don't know why it was there. But we speculate that it was simply using the screen as a way to get from one place to another and the cats startled and panicked it. And then I, with my camera, scared it some more. She (it's a girl) quickly found a way down that kept her a good distance from me and the cats and slipped inside the porch wall. She was living there until recently, when I think she was caught in a trap inside the house. We use traps because the cats are sort of useless as hunters inside the house.

How do I know she was a deer mouse and not a white-footed mouse? Her tail. You can see how the color is distinctly different on the top and bottom of her tail. Deer mice and white-footed mice look nearly identical except for the tail. A white-footed mouse tail also has two colors but they are not as distinct as this.

By the way, deer mice and white-footed mice, which are both native to Vermont, are known to carry the hanta virus (or, hantavirus). In fact, people in Vermont have become sickened with the virus. So be careful — be strict in your homes about keeping the mice out. We are renovating our house so soon they won't be able to get into the walls. Be sure to read this page from the Vermont Department of Health.