The Night of the Flash Flood 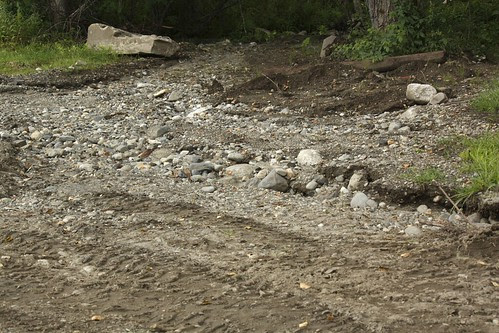 The washed out lower driveway near the apple orchards.

The new septic system was completed the week of July 20. Every day after that, John graded the leach field by tractor and by hand. I helped a bit with removing rocks — tons of rocks — from the ground, to buckets, to the pay loader on the tractor. It was hot and dry in the sun, yet John continued every day, all day long. And finally, on August 5, the grading and seeding was finished.

Late on August 5 the thunder and rain came. It was falling at the rate of inches per hour and it continued for hours. As the rain hit the roof, it was so loud you had to yell so that others could hear you. I went to bed about midnight because the sound of storms relaxes me. John stayed up because he was worried about the brooks from the mountain overflowing and about his newly seeded leach field.

I woke at 1 AM to the sound of the tractor in the night. Opening the window and looking out, I heard the roar of water all around the house. I grabbed a sweatshirt and went downstairs to see what I could do to help. The roar was deafening outside. I could see the lights reflecting in water all about me and I knew immediately what had happened: a flash flood from the brooks on the mountain. I knew that John was working hard to block the water as it roared down from behind the house, around the barn, through the orchard's edge and down the driveway. But there was nothing I could do to help. Later, when John was done, he told me he had dammed an old, broken culvert and made a levee to redirect the water behind the house. The kids told me the basement was totally flooded (but that was okay, because the furnace and water heaters are on blocks because this has happened before. The basement would drain by itself.).

The next morning, I went out with the camera to view the damage. The lower driveway was washed out. The back meadow had been flooded, one brook had cut new banks and undercut old banks. One old culvert that had not been replaced yet had been pulled out of the ground. The orchard was fine, the driveway could be graded. More sections of the ancient, cast iron furnace had been exposed by the rushing water. But the leach field! It was destroyed. There was erosion, gullies, and all the seed had washed away. It would have to be done all over again. Weeks of hot, hard work had been lost! 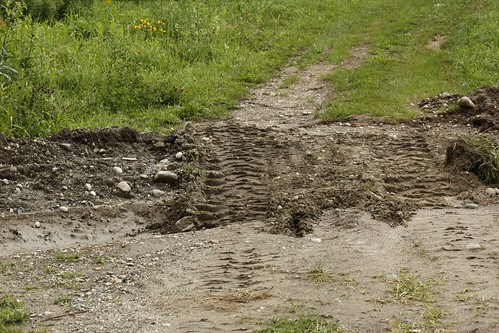 A temporary earthen dam to stop the water from running into the house.
This is where the old culvert had been torn out of the ground by the flash flood. 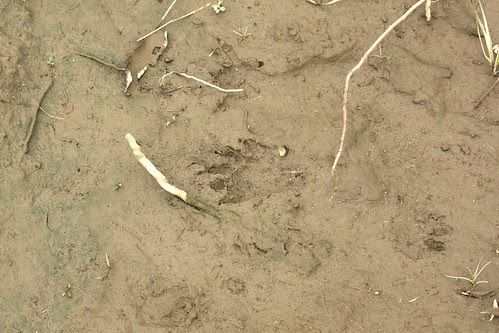 Raccoon and cat tracks in the mud the day after the flood. 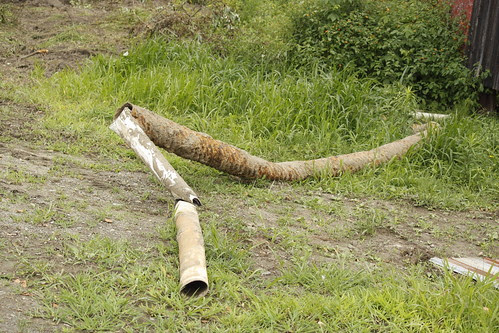 The old culvert that was torn out of the ground from under the back road. 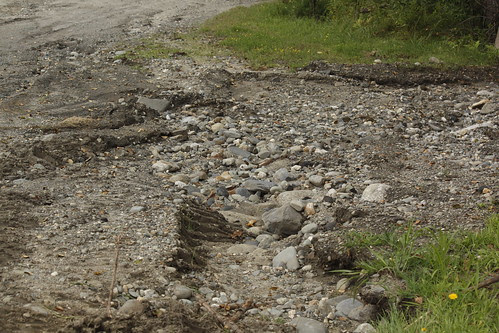 The lower, washed out, driveway near the apple orchard. 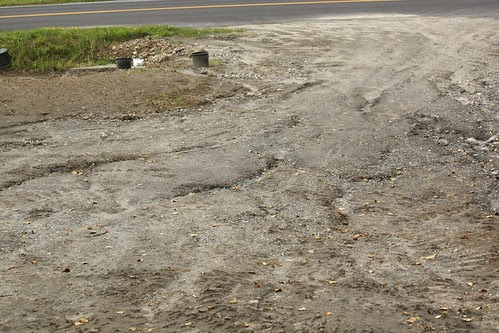 The washed out lower driveway. The new culvert that the town put in held up well and did its job. 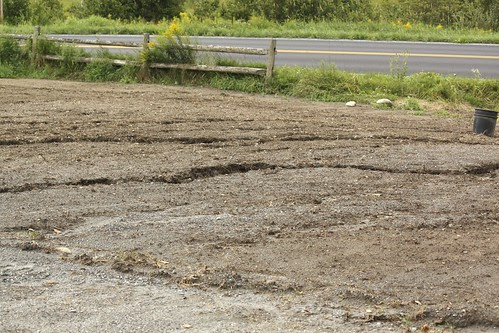 The destroyed leach field.
John completed the work, again, and it is now lush with thick meadow grasses.
John re-buried the cast iron furnace pieces
because they were simply too large and embedded to retrieve.
Future owners of the property in the next century can find and recycle them.