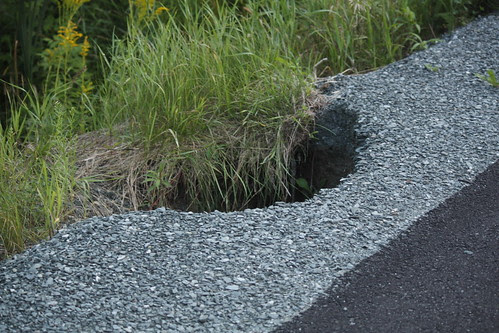 Back when the septic engineer was testing the soil for the new septic system, they were also paving Route 16 here in Barton. They did a great job and even put in new (although very narrow) shoulders). Then we had the torrential rains in early August that caused our flash flood. On the same walk that John and I took when we found the drowning worm, we also walked down our road frontage and found that the shoulder had washed out in several places.

I really should have called the town clerk and told her. If a car had to leave the road because of moose, bear or deer being out there, they could lose an axle or something in those holes. Now that it is winter, the holes will only grow bigger. I guess I'll call in the spring.