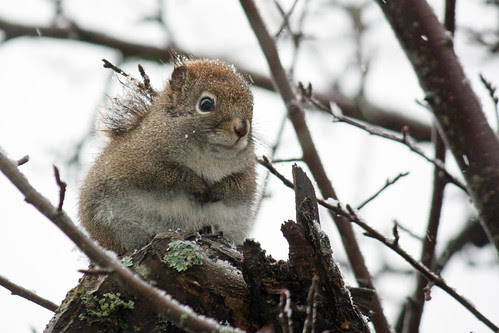 Here I sit in the living room with a mask on my face, my new nebulizer drying in a clean towel, coughing and not looking forward to my next antibiotic. John is demolishing the kitchen. The former sun porch is now part of the new huge kitchen. The 110 year old plaster ceiling is coming down. The dust the past two weeks has been horrendous and has made me sick. I am feeling sort of lost here. Can't go outside, don't feel like blogging. I haven't even been taking photographs often! But I have been photographing the birds and squirrels at the feeders. Above is a cute, fat red squirrel that was at the feeder last week.

Ice cliffs of Mount Pisgah on the south shore of Lake Willoughby.

But more about the house later: I have been documenting the progress on the renovations. The photographs show how poorly people built additions on this old house. And how the little forest creatures love this house as much as I do. Enough about renovations and illness. I've had enough of that.

The big news is that the kids found a great place to live in Brownington. It is quiet here without them. There are no dogs to gobble up my spills in the kitchen or the cat yak all over the house. I miss the two little ones, Ironman and Catgirl, a whole bunch. But John has fixed my stereo and now I listen to VPR and VPR Classical. We seem to have stopped watching TV except at bed time. Occasionally we watch movies on the computers (they are still side by side in the living room as they were on the porch). Even though I miss the kids, it is best they are gone. The construction debris and activity is very dangerous and I don't want them around it. They are right up the road, though, so I'll be seeing them as soon as I am healthy again!

I have been selling photographs, though. Matted and/or framed. I am doing fairly well. I want to get involved in stock photography and craft shows. I have been to two craft shows — the church's Christmas Bazaar and Moonlight Madness. Finally people know what I do! The reactions have been very positive. The photographs that are not of the red squirrel are the photographs that I have sold. I have much work to do with the Barton Library photos and website and blog. I can't work on my summer photographs because my four terabyte server is down! But I do have, and have been slowly editing, photos that are recent.

Just thought I should check in! I hardly ever get so personal in the blogs. But there has been lots going on. I hope your holidays are peaceful and I will once again work at getting up to date!