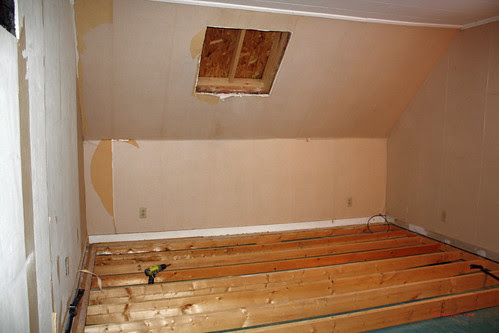 The original bedroom floor is revealed.
The skylight was removed last winter.

In order to properly restore the house, John had to level the entire house with jacks. This would also insure that the kitchen floor was level. He was able to jack the house up quite a bit (a couple of inches) but it still was not level because something was holding it down. John found that our bedroom floor, above the kitchen, was the reason. People had installed a new bedroom floor in a bizarre attempt to keep the kitchen ceiling in place. Instead of repairing the kitchen ceiling, they covered it with multiple layers of stuff and it was still falling down. To prevent the floor above from shaking the ceiling down, they put in new joists on top of the original  bedroom floor. They used hundreds of dollars of joists, covered those with a subfloor and then with carpeting. Because of this new floor and the layers of ceiling underneath, there was at least eight inches difference in height in these two rooms. 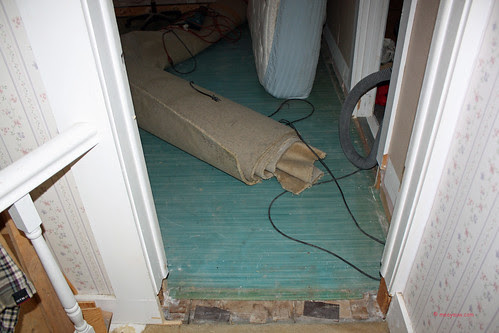 There used to be a step going into our bedroom at the top of the stairs.

John uncovered a blue linoleum floor from the 1950s underneath the new floor. The linoleum was in perfect condition. The step into the bedroom and the step down into the closet under the eaves are now gone and the room is larger and level. 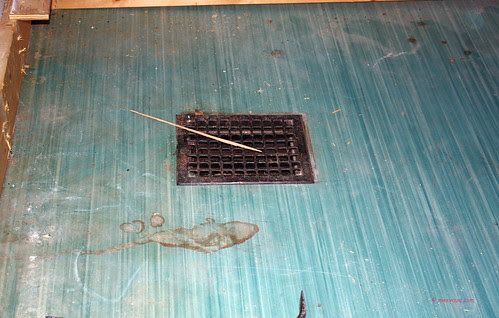 Two old cast iron registers that allowed heat to rise from the kitchen
were uncovered under the floor.

Our bedroom, over the kitchen, was always the coldest room in the house. I remember keeping thermometers in the room and once registered a low temperature of 43°F (6°C) for several nights. It was difficult sleeping there. You had to wear socks, sweats, bathrobes and use at least two quilts for those windy, winter nights. There were no heating ducts in any of the upstairs rooms.

We quickly found that the new floor covered heat registers that had been in the original floor (and the original kitchen ceiling), allowing heat to rise from the first floor. But wait! There's more! 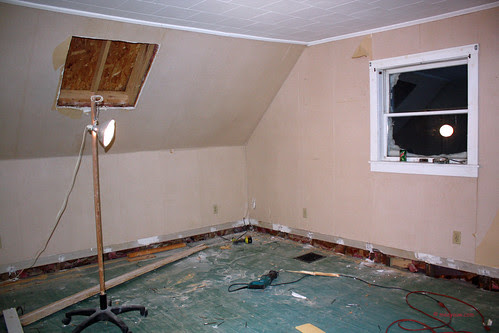 John moved all the furniture out and back in and finished restoring the floor in only one day.
You can see the space beneath the floor and the snow on the window.
Snow outside and in!

The west side of the bedroom has windows where we can see the summit of Barton Mountain. But the northwest arctic winds come from there, also. And John found that the room was never sealed when the new floor was built. You can see in the photos above and below the huge space between the wall and floor that was simply left open. This means that winter winds blew directly from outside into the bedroom. No wonder we froze in the winter! What a bizarre way to "improve" a house! 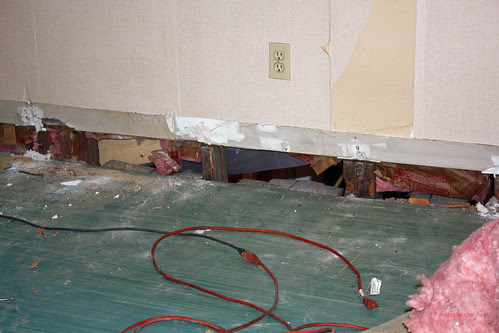 Once the strange openings in the wall were uncovered, Zorro the Cat would let himself outside simply by slipping under the wall, running through the attic, down the attic stairs and to the outside. The wind would come into the room the same way.

Once the newer floor in the bedroom was removed, the house was no longer pinned in place and bounced up a couple of more inches level. The holes in the wall are plugged with insulation for the time being. The southwest holes that opened into the kitchen below are nearly repaired now. And warmth? We are now as warm upstairs as we are downstairs! In fact, since we both like a cool bedroom, we may have to open windows in the winter soon!