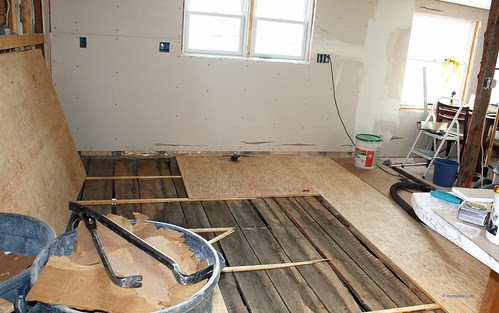 After the new kitchen windows were installed where the new sink will go on the front of the house, and after the sheet rock was installed, it was time to restore and level the floor. John pulled up the floor and found a few things of interest. In the photo above you can see the new windows and walls, which extend through where the sun porch used to be. The old sun porch is now part of the new kitchen.

The original wooden floor from 110 years ago had been cut away and removed in past years. It was quite a loss for me. The original subfloor was constructed from old barn walls. The problem was that it extended over the foundation of the house, so we had ice forming inside the house on top of the floor. The original subfloor was covered with shims, paperboard and plywood. It was flat but it was not level. John had to do some serious jacking of the house again to get it level. But the house will never be truly level in all places —  it will be as level as humanly possible without taking down every wall and rebuilding the house from the foundation up. 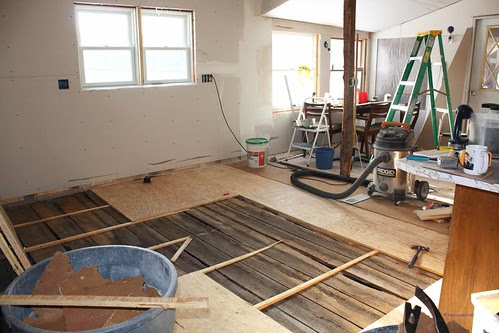 A clearer view of the extent of the new kitchen area.

In the photograph above, you can see a square, plastic covered hole in the right-hand wall at the end of the room. This will be a window to the porch. Half of the old sun porch is now incorporated in the new kitchen, and half will be a summer sitting porch that will look down Route 16 as it goes down into the village. Part of the door to the sitting porch is visible on the far right of the photo.The new kitchen is full of light and has clear views of the beautiful beaver bog. 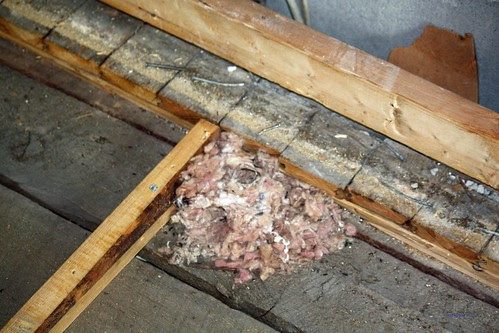 A mouse nest.
You can see that the original wooden floor was cut away here.

And of course, we found this mouse nest under the subfloor! It looks very cozy and warm. It was under the area where Amy and I always had a couch in the kitchen. There is a tiny tunnel to the inside of the nest that you may see on the top of the nest. There was no insulation available anywhere near the nest, so the mice had to manually haul nesting material, which is above the furnace in the basement, to build their home in a warm spot. John is now building a pantry in this area.