Mice In the Walls 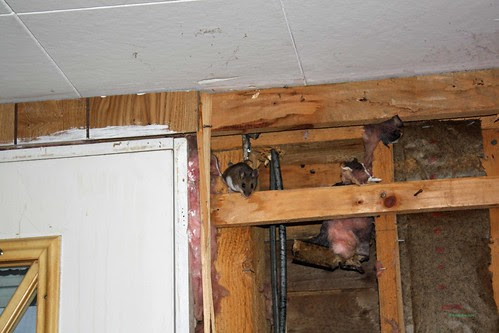 I've written a lot about the renovations to the sun porch. It was my favorite spot in the house in the summer. We would move computers out there for the season. The views were fantastic. We watched moose, deer, coyote, beaver, otter, and all the birds. If we were courageous, we would stay out there during fantastic thunderstorms and try to photograph lightning.

Before Christmas, John began demolishing the porch in order to enlarge the kitchen. We knew this would be one of the most poorly built parts of the house, and it was. We had always heard mice in the walls and under the floor. We even had a mouse leave the porch and walk around the window screens outside! When John took the walls down, the mice began pouring out. Pouring. It was awful. Used to having a "highway" of wall studs to traverse the walls, the mice continued on their paths even when the walls came down. They would stop and look around at the open room, but generally the mice were not alarmed at the lack of walls. 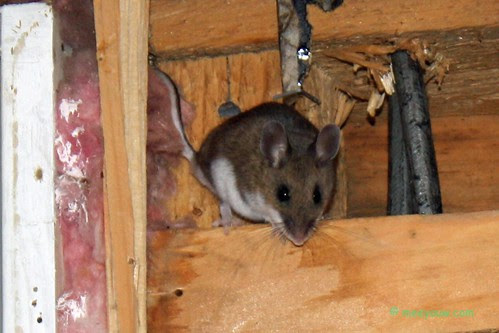 This little guy no longer exists — the cats dispatched it.

The night of December 13th was Cat Party Night. No cats came to bed that night. In the morning we found body parts scattered about the house, upstairs and down. There were remains of at least three mice on the porch itself. We can tell who killed which mouse by the way they were partially eaten. Buddy likes to eat half a mouse when he kills it and leaves the other half (the bottom half) for a snack later in the day. Zorro skins his mice before eating and never eats the tail.

I had quite a few nightmares after December 13th. In them, I would walk onto the porch and see rivers of mice pouring out of the wall. There was nothing I could do to stop them and even the cats were overwhelmed by the quantity of mice! Thankfully, the nightmares seem to have stopped. Mice may look cute but they carry disease, leave trails of urine and feces everywhere (which can cause illness) and are very destructive. They are in infinite supply, too. Every animal in the woods eats them, yet their population never declines.

John's construction and sealing of the walls has just about eliminated our mouse problem. There is no more evidence of them in the pantry or linen closet. But we know there are places in the back hall and laundry room where they still exist. The cats continue to carefully watch and listen to activity in those two walls. We will be mouse free very soon!