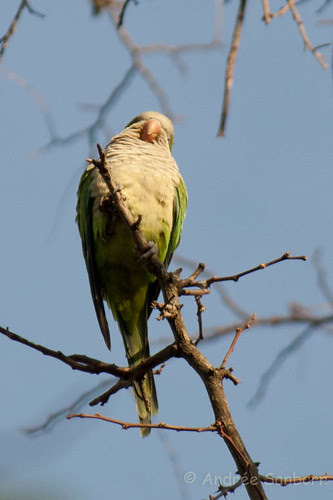 Whenever I visit Anna, I try to get better photos of the parrots that live in her neighborhood. I didn't do very well on the trip this past November. Anna's second story porch was unavailable so I had to photograph from the street. Click here to view my photographs of the birds, which span several years.

Green Monk parrots are also called Quaker parrots. They are native to South America and were released either accidentally or intentionally. They do fairly well in the colder winters of Connecticut. They have also settled in Japan, Caribbean countries and parts of Europe. While most people coexist well with the parrots, some utility companies have tried to eradicate them. United Illuminating in Connecticut chose to gas them (with the help of the US Department of Agriculture). This action created much protest and the killings stopped in 2005. But I found a November 4, 2010 New Haven Register article that says that the Connecticut Appellate Court has ruled that the parrots are not a  protected species , so they may be killed again. UI says they are going to remove nests. 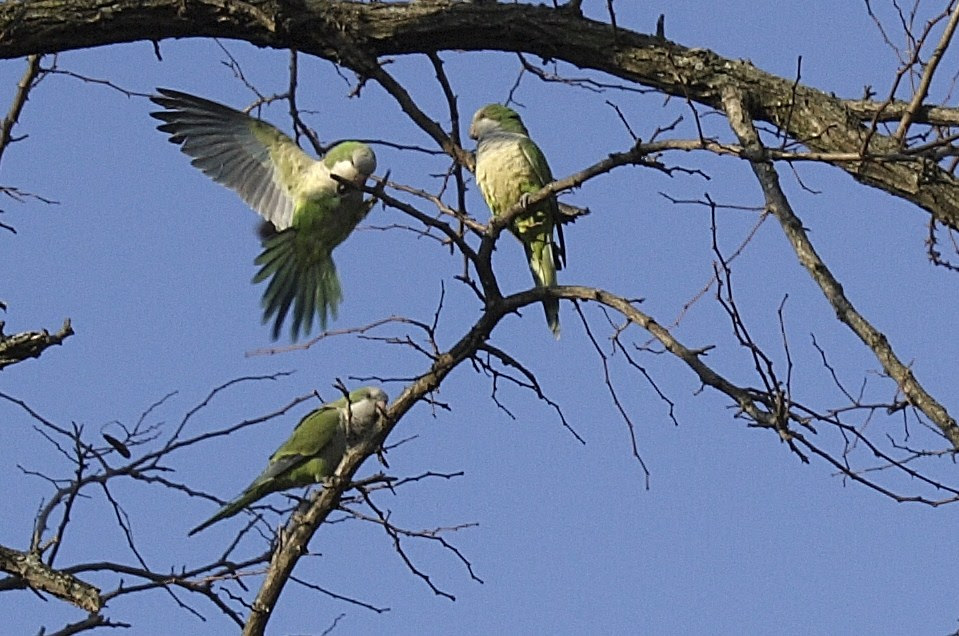 At times, the birds do pose a danger. Just as Anna was buying her house in City Point, a nest that the parrots had built on a transformer (which they like to do for warmth in the winter) burst in flames. The transformer was very close to the house, but the fire department prevented the spread of the fire to the house. The burned next was knocked down but the parrots began rebuilding it the next day. The nests are huge, communal affairs made of sticks. 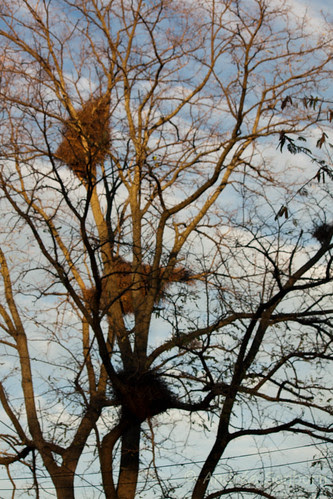 The large tree in front of Anna's house with three parrot nests.

Residents of Anna's neighborhood seem to enjoy the parrots. From my experience, a trip to City Point wouldn't be the same without hearing their loud chatter. Other species of birds use the shelter of the nests. The parrots don't seem to compete for food with native birds, and there is little mess from them. But there are residents who don't want the parrots there. This article from 2007 in the New Haven Register gives a fairly good overview of the problem. It also shows a photo of parrot nests in front of Anna's house (the second photo from the bottom).

I certainly hope that UI does not try to wipe out the parrots. Their population is stable — they are not going to overrun the city. But I don't live there and have no say in their future. 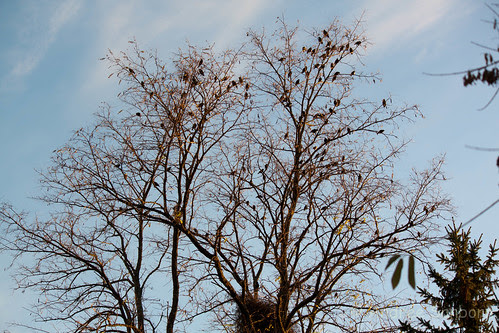 Many parrots in the top of their nesting tree.