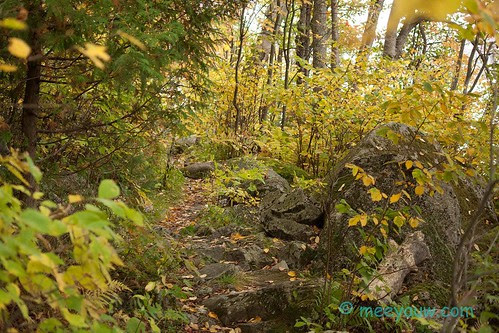 The start of the trail at Pageant Park.

About two weeks after I got my new glasses, I decided to take a fall foliage hike. Alone. John was busy working on the walls of the house and couldn't leave. I didn't want him to go. I had been having problems with depth perception with my new bifocals and had more problems moving about outdoors than in. So I wanted to take a short hike, get some foliage photographs, and practice walking outside. It sounds bizarre to say that you need to practice walking outside, but that's what I felt I needed to do. I didn't want John to see me make a fool of myself, which is what I felt might happen. 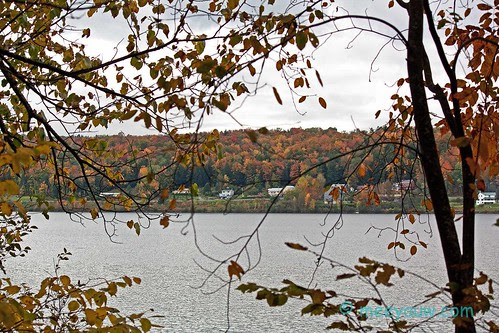 Looking across Crystal Lake to the east side where Route 5 follows the shore line.

I decided to go to the Pageant Park trail. It is only a mile from home (which is comforting when you don't think you can safely walk in the woods with your new glasses),  I knew the trail,  John and I had been married there just four months earlier, and I wanted to duplicate a photograph I had seen on the Internet. Blogger Carol (Carol's View of New England) had taken a beautiful landscape photograph of Barton Village . A wonderful photographer, Carol often comes here to Barton and photographs the area. This photograph impressed me because she said it was taken on the Pageant Park trail. I didn't know of a spot on the trail that was high enough to get the perspective that she had gotten, but I wanted to find the spot where she had shot it. The road above the park would be high enough, but she said she took it on the trail. So off I went on my hike. 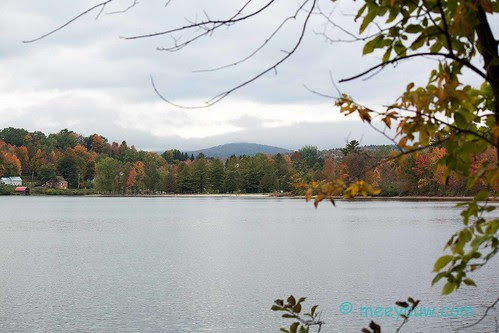 Looking north to the beaches from the west bank of the lake.

We were nearly at peak color that weekend in late September. It had rained all week and I was afraid that the leaves had been rained off of the trees, but the color was good. The heavily overcast skies did not make for good lighting. I was grateful to get these shots of autumn color because I knew they would probably be the only foliage shots I would get this season. . The walk brought back fond memories of my life before John, when I would often hike about alone with my camera. Hikes are better with John, but it is good to reminisce at times. 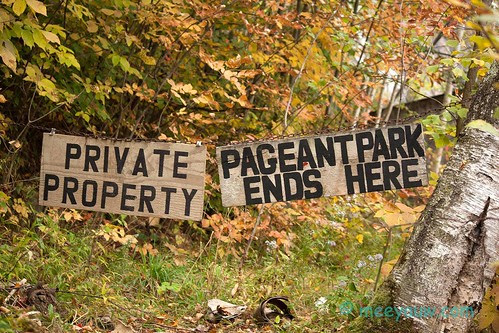 The end of the public trail. I did not stop.

I quickly learned where to look through my bifocal lenses so that I did not stumble over rocks and into trees. I soon came to the end of the short trail where a landowner posted the signs you see above. The trail went around the chain, so I followed. There was a wonderfully secluded camp further into the woods. The only access to the camp besides the trail would be by boat. The people who come there for the summer must have wonderful times. I wanted to get much higher than I was, so I continued following the trail up. I soon came to this dire warnings painted at the base of the cliffs: 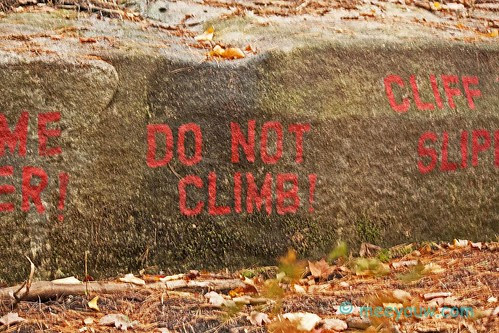 At the bottom of the cliffs. I climbed through the woods, around the slippery cliffs.

I found the trail that safely climbs through the woods and around the cliffs. I climbed until the trail ended and I could go no further. It was then that I confirmed that Carol had taken her photograph from the road above the trail. I know that road and did not want to take my car there. The rain would make the extremely steep, dirt road dangerous and I didn’t feel like taking the risk. I decided to return to the car and go to the village cemetery where I had gotten some wonderful photographs one other year. 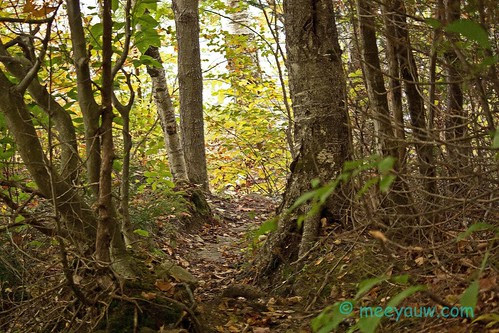 The trail down and around the cliffs. The steep descent began past the two trees here.

Hiking downhill is always worse, for me, than going up. Bad knees, and now bad vision, make me very cautious. As I descended this day, I regretted coming up here alone, or without a rope. It was a treacherous walk downhill on the wet, slippery forest floor. I was successful, though, and got down without incident. The small hike had shown me how to use my bifocals in the outdoors, and I had gotten some foliage photos. I considered the afternoon a success. 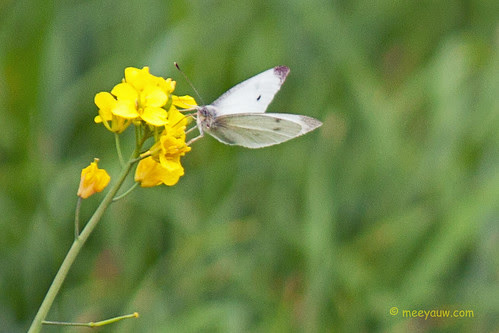 Back at Pageant Park, this cabbage white butterfly confirmed that it had been a good day!