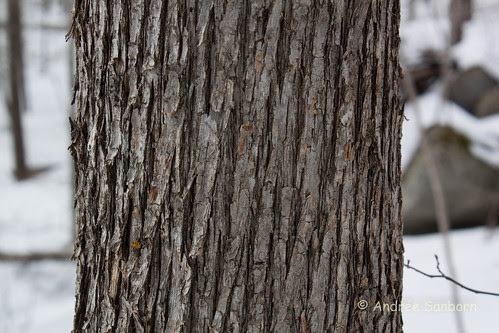 We have quite a few hornbeam trees in the woods. I didn't know this. I thought they were all little beech trees. After reading about hornbeams, it isn't surprising that I thought they were beech: another name for hornbeam is blue beech. But the bark is smaller grained, flakier and grayer than beech. The leaves of a hornbeam are even similar to beech leaves. Since it is winter, I have no photographs of either leaves to compare. And apparently I have photographed every part of a beech tree (leaves, buds, seeds and seed hulls) except the bark. One difference between the trees is that hornbeams, but not beech, have catkins (male and female).

Hornbeam is also called ironwood. It is very hard wood, used for things like axe handles, soles of shoes, piano actions and other object that require a very hard wood. But the most fascinating thing about hornbeam is how it is grown to make hardwood poles and parquet flooring.

Coppicing is an ancient way to manage woodlots. A tree is cut down almost to the ground at the beginning of winter. In the next spring, many shoots will grow out of the stump (which is called a stool). These shoots are allowed to grow for several years after which they are harvested for poles and other uses. These poles can also be used to make dowels. Below is a public domain diagram of the coppicing cycle from Wikipedia:

Dowels are of interest to me because John and I have frequently discussed their use in the construction of the new kitchen. So far, John has made his own dowels to create plugs to cover certain nails on the cookbook bookcase and in an ancient piece of Douglas fir that he used over the kitchen window. When I learned, on an early spring walk that we took on top of the deep, crusted snow in the woods, that we have trees up there that could be used to make dowels, you can imagine my interest!