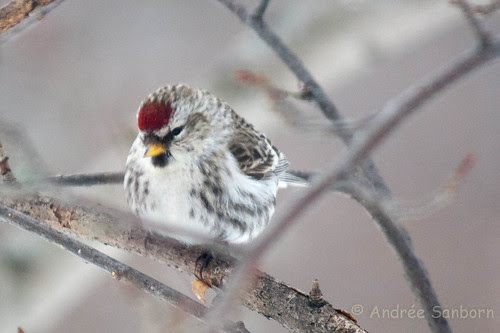 I am not exaggerating when I say that we are getting over one hundred redpolls at the feeders now. It is a hoard of little birds. Redpolls love thistle seed (below). I used to put out just one thistle bag. Then two. Now we have four — two small ones and two large ones. The redpolls prefer the small bags but in a pinch (like when I refuse to refill the small bags) will use the large bags. The ground beneath the bags is an inch thick in thistle seeds. John and I are going to try to plant the thistle in the upper field this year (it is not invasive) to try to harvest our own seed for next winter instead of buying fifty pound bags of it for the birdies. 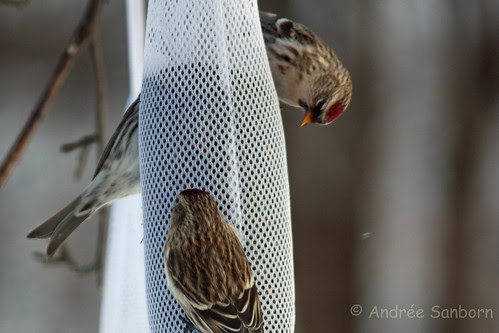 Only 3 redpolls are in this photo but up to 10 birds will alight on a thistle bag.

Redpolls are a bit skittish. If a car goes by on the road (which doesn't happen that often in the winter), they all fly off. They travel together in huge flocks. More redpolls come during snowstorms than during good weather. When I go to refill the feeders, the redpolls will remain in the tree and watch me. The chickadees will bounce around the tree and feeders, so close that I can touch them, and will scold me. But redpolls wait quietly and patiently. They chatter quite a bit to each other. Some have red patches on their heads, some don't. Some have red breasts and some don't. Some simply look like a streaked sparrow. They come slender and plump, dark brown to nearly white. In the summer, they return to Canada. I miss their friendly chatter when they leave. 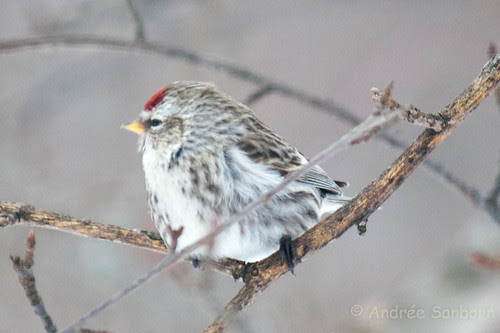