How to Wreck Your Applesauce 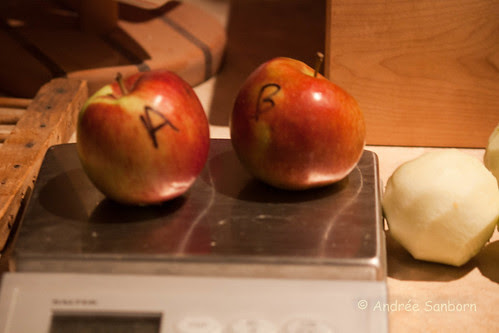 Two experimental apples — A and B.

Do you remember Coxeter's Pippin? If not, please click that link and go read it. A geometry professor claimed that coring an apple his way was the most efficient way to core apples. His claim has been nagging me for days now, so yesterday, while making applesauce, I decided to test his theory.

I had 8 apples for the applesauce and selected two that were most identical in size. I weighed each on my digital food scale after I peeled them. Then I cut both of them equatorially (see the photo in the link of the original post above). For Apple A, I used Coxeter's method for coring. For Apple B, I used my husband's coring method (which, if you remember, he had taught me before I learned Coxeter's method). Suddenly, I wanted to see how much waste was produced with my own method, so I selected another apple, Apple C. I didn't care what size Apple C was. By this time. I just wanted to get this damn experiment over with and have supper. My method for coring apples is traditional: I cut the apple in half longitudinally and then, using a sharp knife, I cut the core out along with my own skin, nail and sometimes bone, creating a lot of blood. I weighed the stuff that I cut out of each apple and created a chart (below). Then I calculated the percent loss of each apple. If you would check my math I would appreciate it. I was grouchy when I did the numbers this morning, so I probably made a mistake. 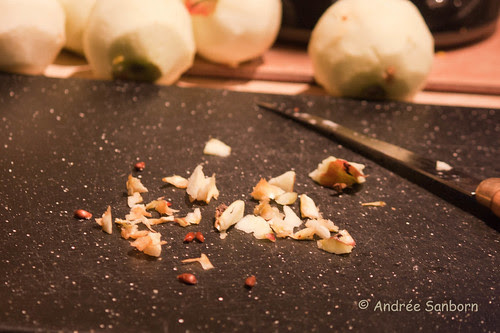 The debris from the Coxeter Pippin Method.

The Coxeter Pippin Method resulted in the least waste, therefore it was most efficient. But I didn't like it. It was tedious and time consuming. I had to dig those little skin-like things out of the apple because they did not "fall out" as Coxeter said they would. My back was killing me as I huddled over the pieces of apple. My method was most familiar so I was able to think of other things besides apples and even hum my cooking song. John’s method was comfortable and somewhat enjoyable because I knew I could become expert at it if I tried it enough. It went fairly quickly, too, but not as quickly as my method.