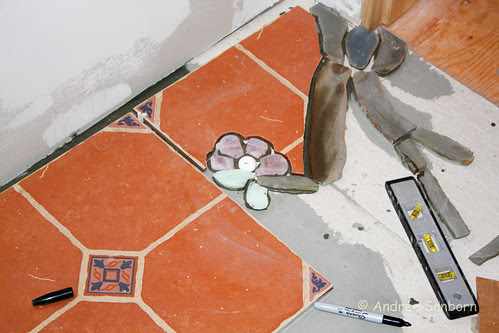 When a house is 110 years old, it is going to sag and get crooked. John leveled the entire house and the kitchen floor was level. He demolished and rebuilt crooked walls and the floor would be straight. But one addition to the house was built crooked to the house. In order to straighten it, he would have had to dismantle the entire addition and rebuild it. The house is sound without doing that. But one consequence is that as the tile floor reached the French doors in the breakfast nook, the tiles would have crossed the threshold of the doors in a diagonal and that would have been unacceptable both to John and to people who walk on the floor.

To straighten that line, John designed and tiled an abstract stone inlay of the trees and wildflowers in our fields and woods. To lay this design within the tiles, each tile had was cut and one piece of the tile was slid away from the other to make room for the inlay. This sliding of a part of each tile realigned the tiles and the floor then appeared straight as it neared and went under the French doors. 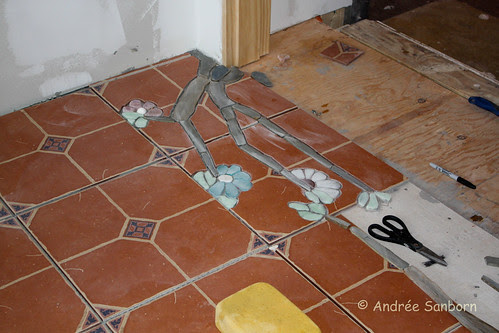 These photos show a small sequence from the beginning until the end of the creation of the inlay. Stone from here and from John's travels was used. The tree is brownstone from Whiteville, Virginia; pink flowers are Brazilian rose quartz; the green is green crystal beryl from Alstead, NH. He also used art glass for the white and blue from Mammoth Caves in Kentucky. The white center of one flower is an actual marble made of marble, sliced in half, giving the floor another dimension. 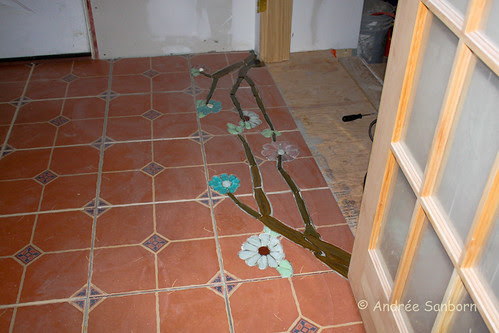 I still have not photographed the inlay since it has been grouted. You simply have to wait for that! 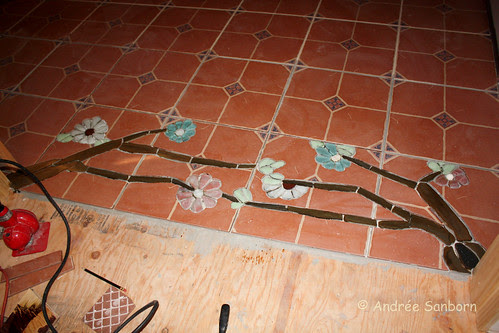 John is now encouraging me to design the counters of two built in cabinets that he has built (one in the breakfast nook and one in the living room). I had planned on doing tessellations of regular polygons. But after looking at the tile and stone that I have available, I have decided on an abstract pattern featuring local stone from the fields and the granite quarry up the mountain.