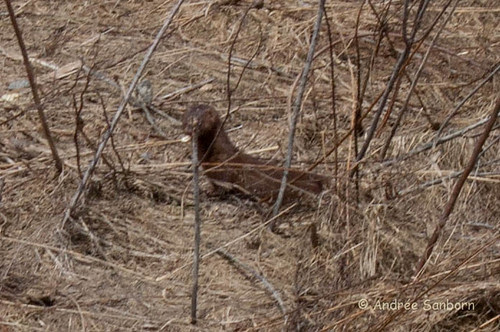 These photos were taken on April 10, but my story begins on March 27. It had been a warmer winter day than usual, so I went outside after church to photograph birds at the feeder (not through the window as I usually do). I was getting some good shots. I began to adjust the settings on the camera when suddenly something long and brown with a long bushy tail ran past me. It had come from the bog and ran past me, under the feeders and up the hill. The snow was so hard with a crust of ice that he left no tracks. And me? Even though I had the camera in my hand, all I could do was breath, "Oh wow, oh wow!" softly and quietly over and over again. Another missed shot! The birds, by the way, never paid attention to this animal at all.

I knew the creature was either a small fisher cat or a mink. But my eyes simply are not good enough for details and all I knew was that it had a bushy tail and was not dark enough for a fisher cat. John suggested a mink and I agreed — it only made sense. The subject was dropped until April 10, two weeks later. 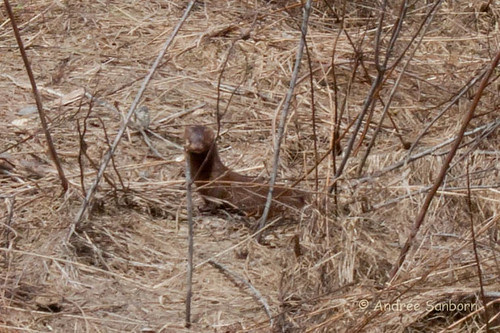 It was after church again, but I was inside editing photos. John called out from the back of the house that my mink had returned. I grabbed the camera and went to take some pictures. I was pleased that I had the 250mm lens mounted on the camera. I'd get the shots this time! The mink was in the back dooryard on the knoll. This would be an easy shot if I could get a clear view! I opened the backdoor slowly and it creaked. The mink heard me and swung his head around and watched me as I photographed him. For about five seconds I got off quite a few shots before the mink ran up the hill to the rock pile across our back road. I remember now that for the last shot I zoomed in. That was a clue something was wrong with my photographs. 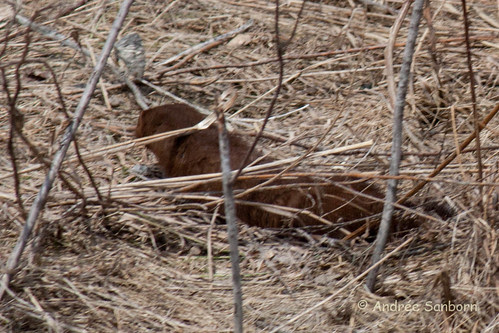 I ran to the computer and downloaded the photos. I had not shot at 250mm! They were all 50mm! I was devastated. But I viciously cropped and edited and these were the best shots I have.

In the days following this encounter, the cats began going out more and more as the weather improved. They were constantly drawn to that rock pile that the mink lived in. They began spraying it, also, which was a significant territory statement. But the days went on and we slowly forgot about it.

We have not seen the mink since April 10.