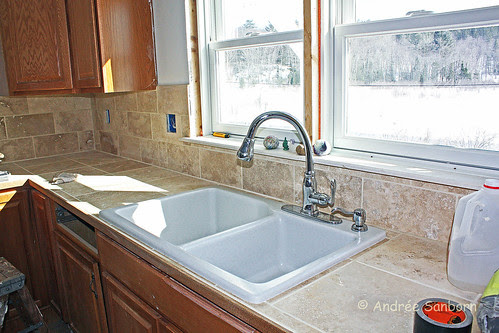 On February 17 the new kitchen sink was installed. It is cast quartz and they make them by mixing a lot of ground up quartz with some epoxy. The quartz glitters in the sun. It has one shallow basin and one deep basin. The faucet is Glacial Bay with a spray and a soap dispenser. It is a great set up and I love it. When the sink gets dirty, I just wipe it with a dishrag and it's clean. It's strong enough to withstand the abuse that John gives it with his tools and substances such as joint compound and paint that he dumps in it. My sister, Camille, has a cast quartz sink also, but it is made out of black quartz and is gorgeous. Hers has one huge basin (I must get a photo of it).