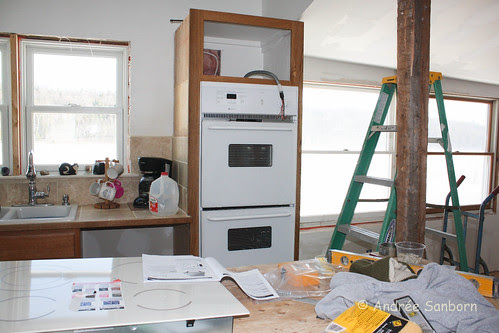 The double oven is set inside its new custom cabinet.

A couple of weeks before the appliances came, we downloaded the installation manuals for the oven, dishwasher and stove top. John needed the specs so that he could do the electrical work properly. He followed the electrical specifications perfectly. And then we drove to New Hampshire and got the appliances. 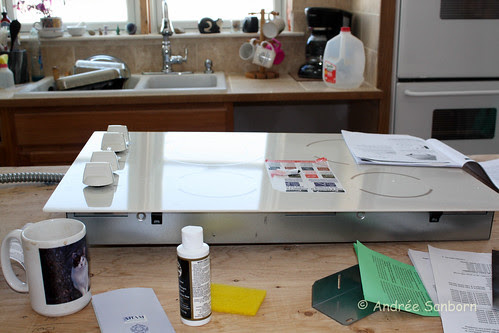 Right off, John found that the oven's wiring was at the top of the appliance and not at the bottom as it stated in the installation manual. So John had to take out all of his wiring out and rewire, not just the oven, but part of the kitchen because wiring on the top of the cabinet meant that the wires had to come out of the ceiling and not from the basement. The cooktop wiring was completely wrong, but it wasn't as frustrating because the manual had said not to install the electrical until you have the cooktop. The oven was supposed to be 30 amps but turned out to be 40 and there was a similar problem with the cooktop The dishwasher? No problem! Whew! 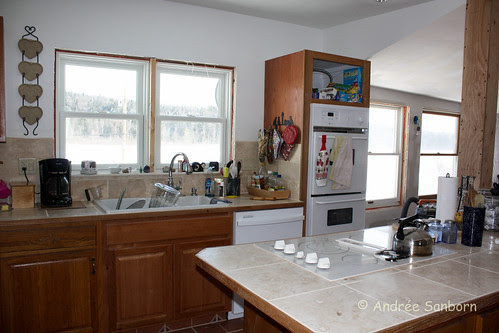 Finally, everything was installed properly, the counter for the island was tiled and grouted, and we had a kitchen that we could now cook in. It was fun moving in! There is still a lot of detail work to be done: more custom cabinets, trim, doors, drawers, knobs . . . who knew that so much detail work went into construction? I've been enjoying every moment of it.