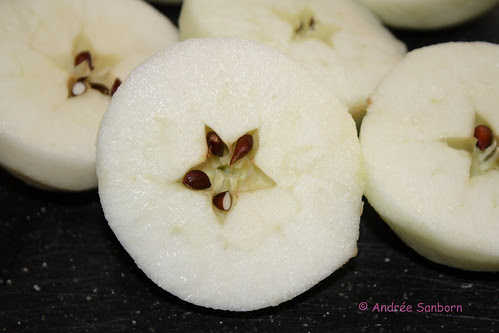 John and I peel dozens of apples for pie, sauce, and slab. Depending on the size and quality of the apples, we will either peel and core by hand (with or without a corer) or by crank. John recently taught me that cutting apples equatorially and then coring them takes less time then the traditional cutting and coring. I have often wondered if there was an even easier or better way than all of the methods we have tried. I found a way tonight! But this is a puzzle. Your clue is the photo I took (above) of equatorially cut apples from January when I made two huge slabs for the weekend. By the way, I no longer use the King Arthur slab recipe. I double a pie crust recipe for a double 9” pie, use a 13x9 Pyrex pan, and just make an apple pie (butter, flour, brown sugar, cinnamon, nutmeg, ginger, cloves are all measured by feel and sight) in the rectangular Pyrex.

There are many ways of eating an apple. At one extreme is the child who met the request, "Can I have the core of your apple?" with a flat, "There ain't going to be no core!". Various procedures with various implements are designed to remove the core, but probably not one apple in a million is cored in the most efficient fashion possible. How in fact should an apple be cored, to remove all the core with the least possible waste?