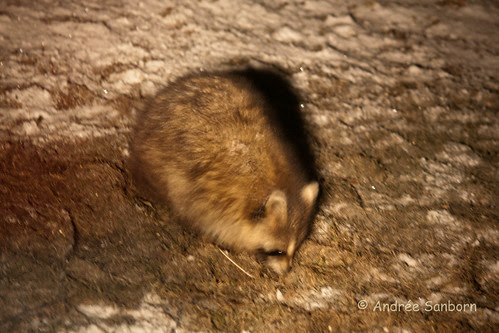 These photographs are from a series of experiments with light and shutter speed. They were taken at night with flashlights held by my husband. No tripod was used because I didn't think I had time to set it up. Ironically, this coon stayed so long I could have set it up and still gotten a thousand photos. The raccoons have not returned for me to continue the lighting experiment. 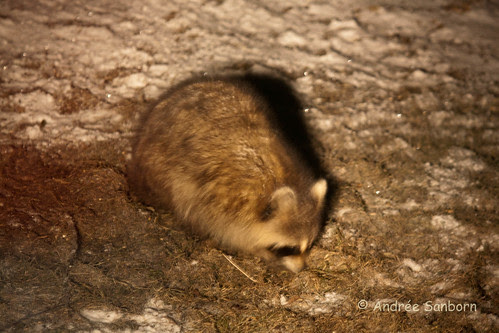 I posted one of these photos at my Project 365 site and was both gratified with the generous comments and dismayed with the general consensus that raccoons are "cute." You may remember the night the raccoons here slaughtered four chickens and the nightmare we had clearing them out of the woods. There is also the threat of rabies, which is a very real threat here. There was a raccoon rabies outbreak within the past five years. On top of all of this, there are the cats. But the cats are in at night which is when raccoons come out.

Nearly two weeks ago, I was polyurethaning a new cabinet that John had built in the new living room. I was concentrating. I remember John walking through and saying something about raccoons. Later, I heard him tell me from the other room that there was a raccoon lying under the bird tree. I was curious and wanted a photograph of a raccoon in the daylight. I mentioned that it was rare for them to be out in the day and wondered out loud why it was there. I got the camera and went to the window. Sure enough, the raccoon was lying down. But it was not eating bird seed. It looked sort of dead. John joined me at the window then and I told him it looked like a dead raccoon. He said, yeah, it did look like that. I asked why it was behaving like that. He said because he had shot it four times. I screeched, almost dropped the camera, and left the room.

Apparently while I was working on the cabinet, John had told me there was a raccoon behaving badly outside. He had loaded his rifle in the same room that I was working in and gone upstairs for a clean shot. The raccoon had been stumbling and could not keep its balance. It probably had distemper and John humanely shot its troubles away. 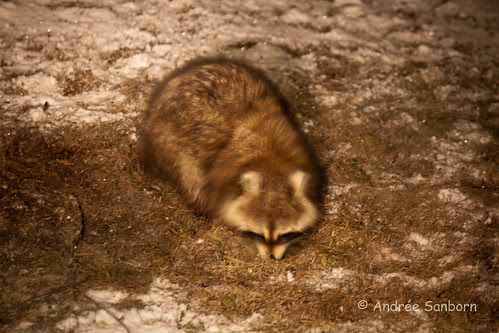 All the raccoons that we have seen since then have been healthy, as the one in these photographs is. But we are keeping a wary eye open for them.