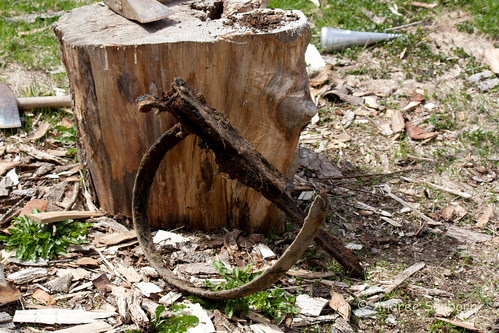 A tine from a spring tooth horse-drawn harrow

After last year's flash flood, when we suffered damage, John has been grading the land around the house and digging out the original stream beds for the brooks. As part of this project, he had to grade the back dooryard, which slopped right into the basement from the brooks. He has excavated the area so that it is flat and level with the brook in the back yard. While digging, he found dozens of antique bottles and horse paraphernalia. Obviously, there used to be a barn on this site. Up the road at the culvert close to Stevens Mill, there are many rose bushes. We think the original farm house was there. There are also huge maples there that people usually kept about their house.

John also uncovered a stone foundation for a barn in the back yard. He has taken out the most dangerous of these boulders and built a stone wall at the bottom of the rise out back. I apologize for not having photographs of this project. The blackflies have been ferocious this year. I don't know how John works out there with those things, but I can't tolerate them and have not shot his work. The back bathroom and hall are usually muddy now because of the work, so I sweep and vacuum almost every day. We are planting on top of the stone walls — rhubarb, chives, horseradish, daffodils, lilacs, cucumbers and even tomatoes. There are also plans for sunflowers, sedum and a fern garden. There will be photos soon. Promise.

Anyhow. During the excavation of this barn foundation, John found this tine of an old spring tooth harrow. Click here to see a photograph and description of a complete harrow. John is positive that the entire harrow is underground, but it is not threatening to be pushed to the surface by frost, so he didn't search for it. This harrow was a one-horse harrow and had a wood frame, some of which we have. Harrows were used after fields were plowed. The harrow prepared the land for seeding.

Besides photos of the project, I will be photographing all of the artifacts that were dug up. This project was more of an archeological project than a grading project. We now have three known household dump sites on this land.