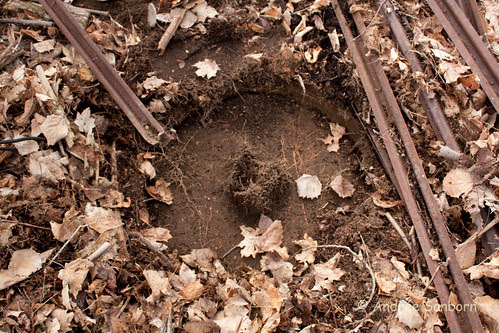 Where the millstone was found.

Up behind the house is an old dump. In the dump is an old wringer washing machine, old tools, a plow that is one hundred years old, and a belt saw. Most of the things are half buried in the forest floor. I don't dig through there anymore because I thought after ten years, I had found everything I could see. I was wrong. 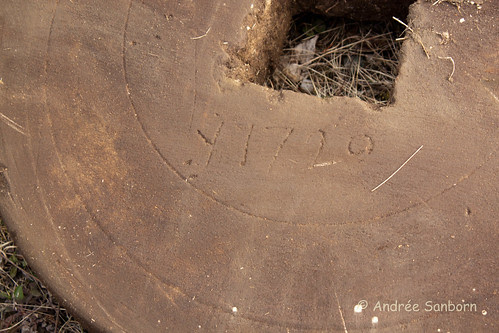 Seeing some incongruity in the ground, John began to dig in one area and found a very old millstone dated 1790. It is extremely heavy and in perfect condition. He also found the iron frame that used to hold it. In order to get it down the hill and back to the house, he had to attach chains to it and drag it with the tractor. I have had a suggestion that we can use it in a garden (if we can get it into a garden). What do you think we should do with it?

The area where this was found, the dump, wasn't just a dump. It became a dump after a barn there fell in — you can tell there used to be a barn there if you know what to look for: the young trees in the middle of this area and some big foundation stones.  Since that time long ago, newer trash was put there. Hence, the washing machine and newer fencing materials that you find there. There is another household dump down near the spring well. On the same day that he found the millstone, John pulled another antique bottle out of the second dump. We have quite the collection of antiques here!