A Couple of Problems 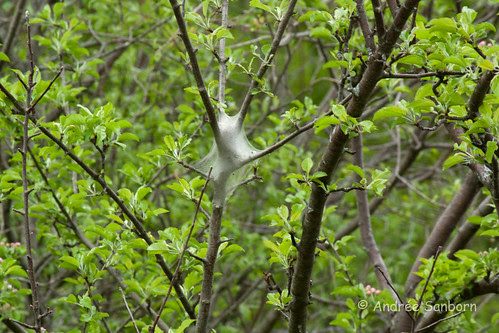 One of the apple trees has tent caterpillars. Probably more by now since we haven't done a thing to this nest. At least the birds will enjoy the tasty caterpillars. A friend in the village has or had a nest in one of her apple trees, too. She was going to cut the branch off and smush them all with her feet. I have to check with her about that, but this branch of ours is way, way high up — too high to cut. 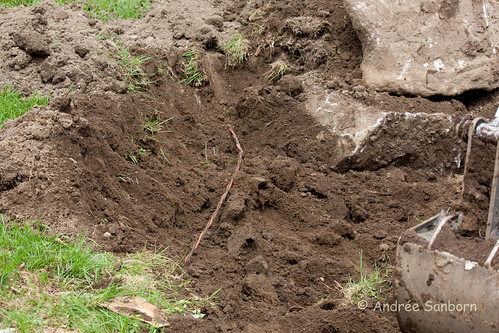 Electricity to artesian well only 6" underground

Because of flash floods and flooding brooks, John re-graded the back yard this spring. Now last year, while re-doing all of the electrical in the house, he found all the circuits and wires except the one for the artesian well. He found it this spring with the backhoe. He dug very carefully because he knew the wire had to be somewhere back there. But he never figured it was only six inches underground! We could have dug into it at any time over the past few years! It wasn't in any pipe or anything. It was just lying under there. The wires don't go straight from the house to the well. They go way out to the small hill, as if they were going to go out to the spring well (which, of course, doesn't need electricity) and then snaked back to the well. For the past couple of weeks, these wires have been draped over the roof of the garage while the grading is going on. They will be properly buried when this digging is over.

Other than these problems, we have that mink from the winter sneaking into the garage to steal garbage. The weeds have almost taken over the day lily garden. The black flies have been the worst I have ever seen in my entire life. But worst of all is that two of my cats have illnesses. 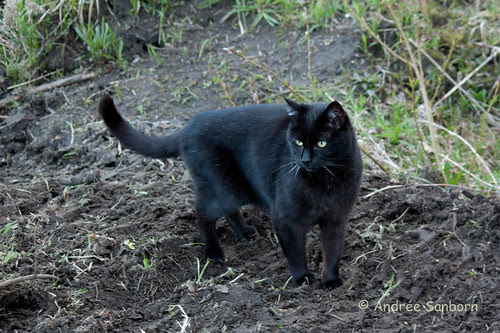 On their vet visit this year for rabies and distemper shots, I complained about Zorro's vomiting and weight loss. I had had him wormed and changed his food but it just gets worse. After a blood test we found that Zorro, who will be 16 years old in August, has hyperthyroid problems and is now on a little daily pill. I hope it works because he is still losing weight. 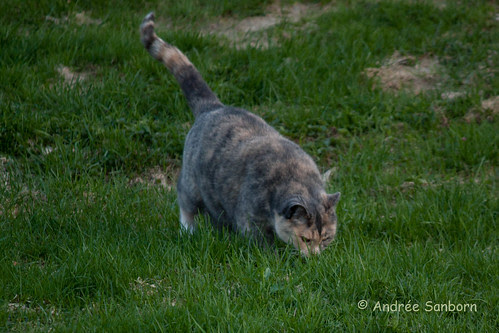 Sadly, Possum has EGC (Feline eosinophilic granuloma complex). It is manageable but is inevitably fatal and I have lost several cats to this. Right now she only has lesions in her mouth and they are so small they don't require treatment. But they will. I hope that researchers finally find a cure for this disease. She and Zorro are such sweeties. We have gone so many years without cat health problems that I probably was thinking these kitties were immortal.