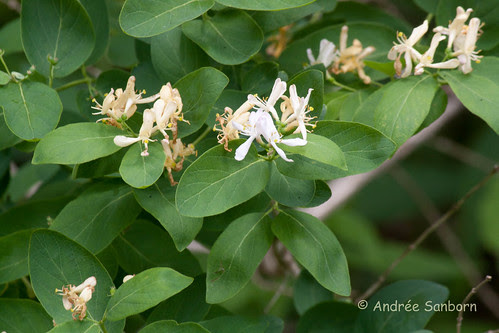 While clearing the hillside above the brook near the house, John found a very large honeysuckle bush. The State of Vermont lists five species of honeysuckle here that are invasive. Four of the five are under quarantine (The quarantine makes it illegal to buy, sell, transport, cultivate, etc. the plants on the list. There are two parts of the list: Class A and Class B species. Class A plants are exotic species that are currently on the Federal Noxious Weed List and are not known to occur in Vermont. The movement, importation, sale, possession, cultivation, and/or distribution of these plants are prohibited. Class B species are exotic plants that are known to occur in Vermont and are considered to pose a serious threat to the State. The movement, sale and/or distribution of these plants are prohibited.). Source: http://www.vtinvasiveplants…..

Considering the alarming information about these honeysuckles, I set out to identify ours. Think that would be easy? No. The state has awful photographs and generic descriptions, as do other resources. When we found good photos at the University of California, the descriptions either did not match or could describe another species. I noticed in my Vermont research that the Nature Conservancy is involved with invasives in the state, so I e-mailed the Vermont co-chair of the Vermont Nature Conservancy. And finally, I had some real answers. Sort of:

The state’s deep financial shortfalls may have prevented them from hiring a purple loosestrife control specialist, usually a summer-long position.

Unfortunately, she failed to tell me the species that are native and where they can be found. I have spoken to professional nursery owners here who did not even know that there are native honeysuckles. But at least we have an easy test for native/non-native honeysuckle. Click here to see a photograph of the hollow invasive honeysuckle stem. 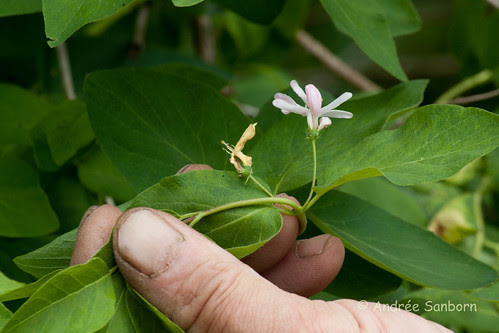 Yellow flowers were pink but turn yellow when they have gone by.

We found that our honeysuckle is invasive. This brought up a whole new problem: do we eradicate or not? We have decided not too. In our entire two lives, we have never seen any honeysuckle in any forest. While birds and mammals may spread the seeds from this shrub to other areas, we haven't seen any except behind the library downtown in Barton. The bush we have is huge; it is about 15 feet tall and 6 feet wide. It is on a steep hillside. We are still weighing our options, though. This entire episode has brought up a deep division of philosophy about invasives. When are they no longer invasives? I have serious problems about the request that Vermont makes of us to report invasives. I reported the rapid spread of loosestrife in the bog last summer. Nothing happened, so I began eradication. Loosestrife is more of a menace than honeysuckle, as is Japanese knotweed (here and here). I have not seen Vermont take any action to eradicate these invasives except to tell us to do it.  What do you think about this invasive controversy?