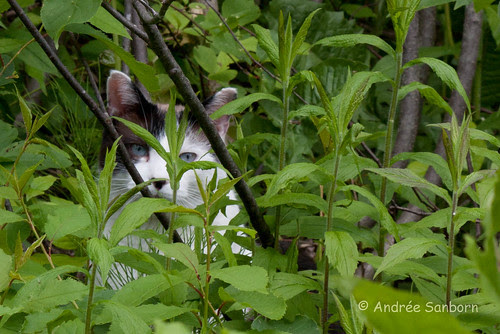 Buddy in the brush

As soon as I get up in the morning, if it is light out, Buddy goes outside for his morning hunt. He stayed out a long time one morning last week. I was already upstairs doing chores when he returned. I found him eating something on the kitchen floor, making a mess. John explained the mess to me. Don't read any further if you are squeamish. I'm not especially squeamish about cat hunts, but this story was just outrageous.

Buddy found a nest of newborn mice. They were perhaps an inch long without any fur. Apparently he gathered up a mouthful of them and proudly brought them home, as he does with many of his kills. He came into the kitchen, making his proud hunter yowl, because John was there. (Remember: we keep the doors open when it is daylight so that we aren't the cat door openers.) Buddy dropped his mouthful of still living baby mice on the kitchen floor, got his praise from John, and settled down to eat them all up. He was on his last bite when I entered the room, heard the story, began to gag, and quickly left. It was over twenty-four hours before I was able to put the situation in the proper perspective and could be affectionate with Buddy again.

It's that mother / baby thing that got to me. I visualized the mother mouse grieving over her lost pinkies (that is what baby mice are called) and identified way too much with the entire situation.

Buddy and I are tight again and he continues to accompany me wherever I go, whatever I do.