The A. K. Ballard Company 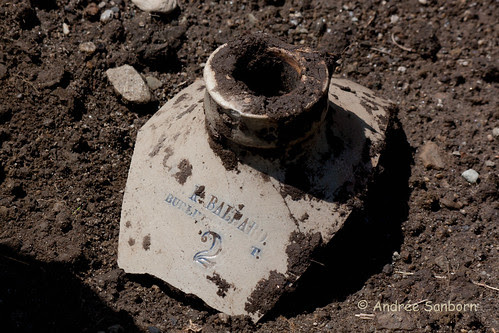 A broken Ballard jug excavated from the back dooryard.

With just a bit of searching, we learned that if this jug had been whole, it would be worth at least $500. But it was broken and only small pieces of the rest of the jug were unearthed when John was excavating the back dooryard. The University of Vermont has a collection of pottery from the A. K. Ballard Company of Burlington, which made this jug. UVM writes:

About the year 1830, E.L. Farrar built a pottery company on the south side of Pearl Street between St. Paul and Church Streets. In 1850 the Ballard Brothers, Orin L., Alfred K., and Haria bought the company. They enlarged the establishment, but in 1867 the company was dissolved. Alfred Ballard ( - 1874) founded a new company which he held until 1874. After his death, the company was sold to Franklin Woodworth. Woodworth continued in the pottery business until 1896. When he sold the company, the pottery became a dye manufactory. At present (December, 1979) the building houses a restaurant.

We found one other source of information: Ballard Family Potteries at the Internet Antique Gazette:

The three Ballard brothers, Orrin L, Alfred K, and Hiram N. worked briefly in Burlington before taking over the old Thompson & Co. pottery in Gardiner, Maine in 1854. In Burlington they used the incised mark BALLARD & BROTHERS/BURLINGTON, VT. They operated the Gardiner facility for about a year and produced wares with the incised mark BALLARD & BROTHERS/GARDINER ME. Following this experience the two brothers moved to Portland, Maine, where in 1855 they established a pottery at 100 Green Street. The 1856 Portland directory lists them at that address and describes the as “Manufacturers and Wholesaler Dealers of Stone Ware of every description, which they offer to the trade on the most reasonable terms.”

Orrin and Alfred moved back to Burlington and made pottery together from 1859 to 1867. Their mark was O.L. & A.K. BALLARD/BURLINGTON, VT.

From this information, we estimate that this jug was made between 1867 and 1874. The history of this house continues to be uncovered . . .

Email ThisBlogThis!Share to TwitterShare to FacebookShare to Pinterest
Labels: renovations