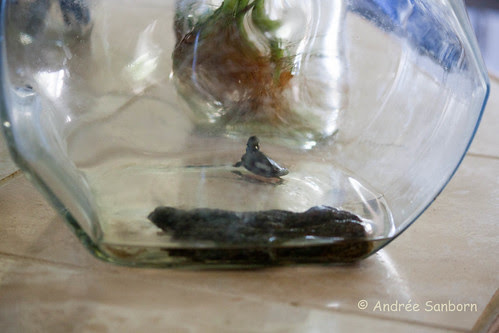 Do you remember how John had to excavate the back yard to level it so the house wouldn't flood? One day, when he stepped up into the tractor to continue excavating, he saw a strange, tiny shape in the hole he was digging. John got up and picked it up and found an infant painted turtle. We found an old aquarium for the baby, and got him a couple of worms and lettuce and a rock to lie on and let him rest. The turtle had to have been born either in the beaver bog or in a sandy bank on our property. A friend has told us how she has seen, this year, a big turtle crossing the road here. We haven't found any turtle nesting sites yet, though. But however it did it, the baby turtle came up the brook and crawled into the back yard and into the excavated hole. I am so glad that John's eyes are so good. I doubt anyone else would have seen a well camouflaged baby turtle in a big hole. 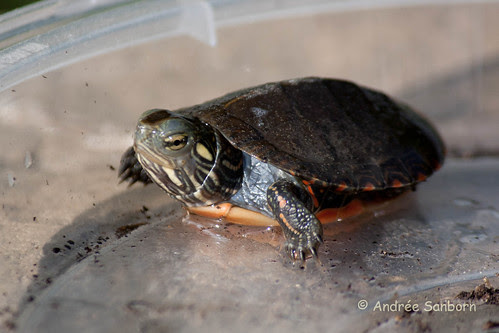 The turtle had no distinguishing marks to identify it, but John knew it was an Eastern Painted Turtle (Chrysemys picta). The baby never ate lettuce or any vegetable — it only wanted worms and flies. Some of the worms crawled out of the aquarium, which was sort of nasty because the turtle was on the kitchen counter! We have some earthworms in an elephant ear plant pot. I have been feeding the worms some coffee grounds and bread crumbs from our homemade bread. The worms came from the soil from the yard which we used to plant the huge bulb of the elephant ear in a huge pot. Basically, we used one pet to feed another pet. 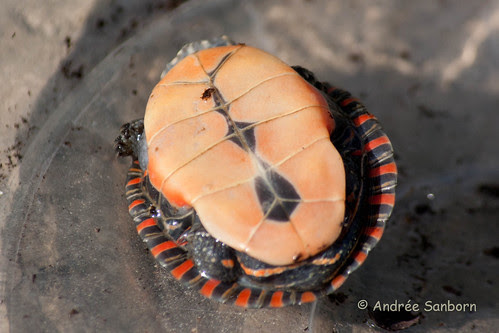 By the time we released the turtle, his markings had developed.

We often debated how long to hold the turtle. He was not doing well at first. His shell was dry and dehydrated and he was lethargic. But after two weeks of rest and food, he began to do much better. His colors appeared as he grew and he vigorously attacked the worms. If we kept him captive, he would probably have outlived both John and me, and he would never be able to survive in the wild. If we released him, he would most likely be eaten by somebody else. We finally decided to release him and let him enjoy whatever freedom in the wild that he had coming to him. The brook was running slower after the spring rains, and we decided that June 18 was the day for him to leave us. I carried him out to the brook and set him free. The rest of the photos are of his delight in the outdoors. 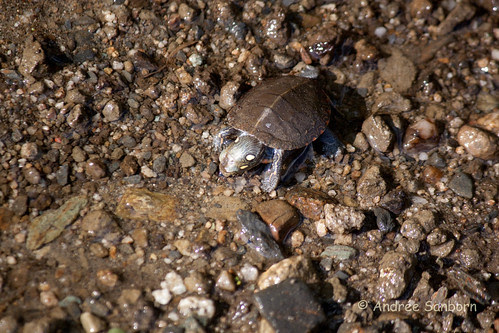 Baby Turtle's first drink of wild water in the brook. 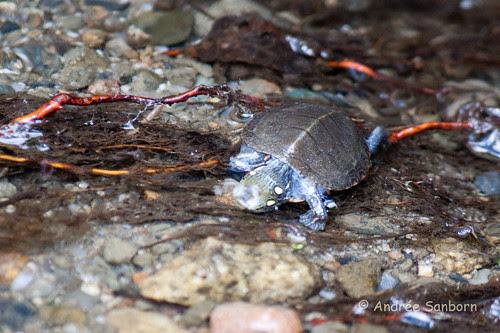 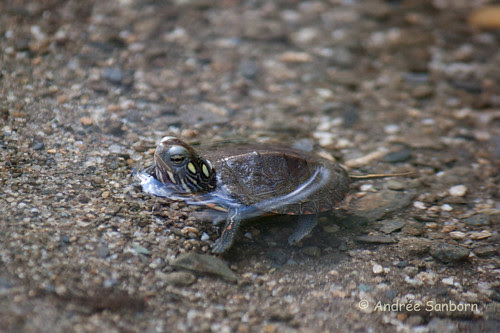 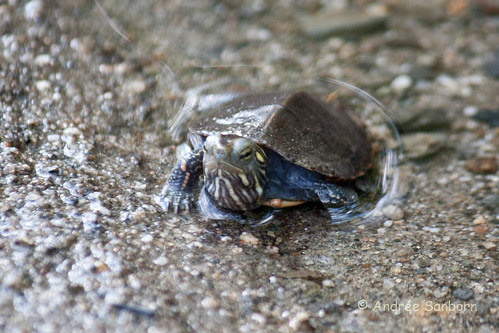 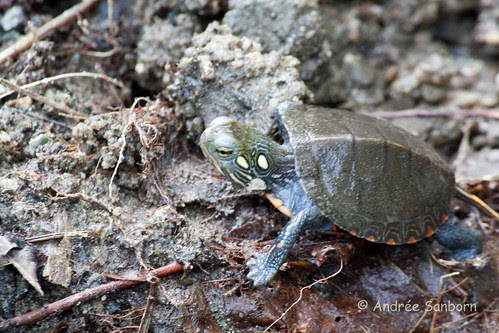 After an hour of eating, drinking and swimming, the turtle left the brook once again — headed in the same direction to the same place where John found him! I redirected him several times and hoped he would hang around with us amongst the irises and wildflowers we had planted on the bank of the brook. But I turned my attention to something else for a few moments and he disappeared. We haven't seen him since and I often wonder how he is faring. I think we made the right decision in releasing him. He was a determined little guy, healthy and strong. He definitely enjoyed life outdoors. 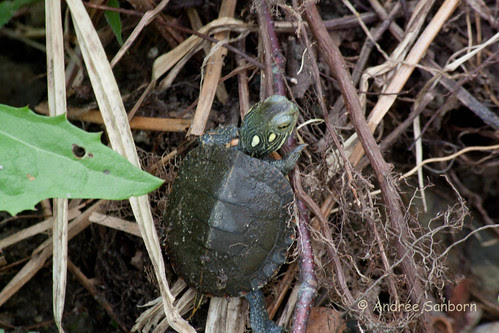 Our last sight of the little turtle.