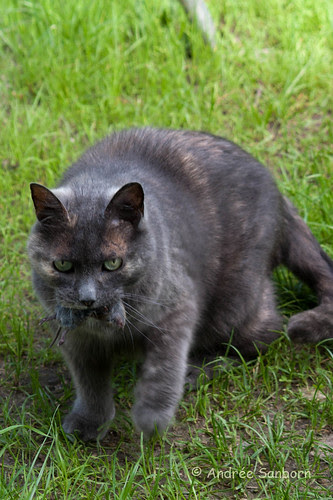 Pansy brings her mouse to us in the house.

I think John and I are too permissive, indulgent, complacent — whatever you want to call it —  about the cats. I find that not many other people understand stories like this.

Pansy caught her first mouse in New Hampshire two years ago and since then we have no documentation that she ever caught one again. But she got one on July 10. I was leaving the house out the back door, which is always open during daylight for the cats, with my camera, as Pansy was trying to come in with her kill. Pansy hates my guts, so she wouldn't enter while I was there. I took advantage of this to photograph her and then stepped aside to let her in. 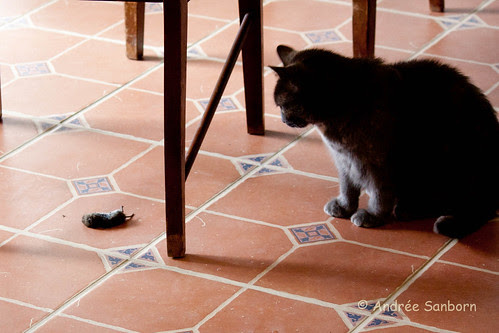 Under the kitchen table.

Pansy ran to the kitchen and dropped her dead mouse under the table. She doesn't eat her mice. She just drops them and guards them. But Oscar was not going to let an old lady's spitting deter him. He began to bat the mouse about on the floor when Pansy hissed at him. Oscar challenged her authority and she relented and let him have it. 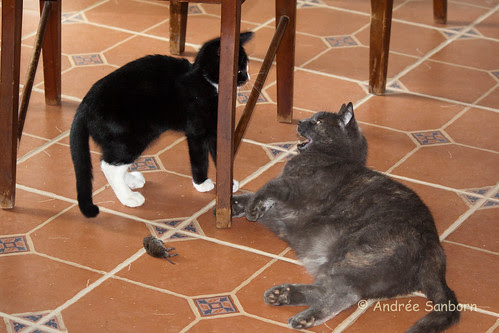 Now it was Oscar's turn to be ferocious. He growled and postured as he took possession of the mouse.

July 10 was a Sunday — pancake breakfast day — so I began cooking.as Oscar was tossing the mouse about the kitchen and dining room. A friend, R, dropped in then. Since we were going to have breakfast, I invited him to join us and he accepted. He sat down and began watching Oscar tossing his dead, mangled mouse about. John and I, realizing this may be an odd breakfast activity, explained to R that Oscar was learning to hunt, getting a good taste for mice, and we were very proud. An odd expression came over R’s face, but he ate plenty of pancakes, sausages and coffee. 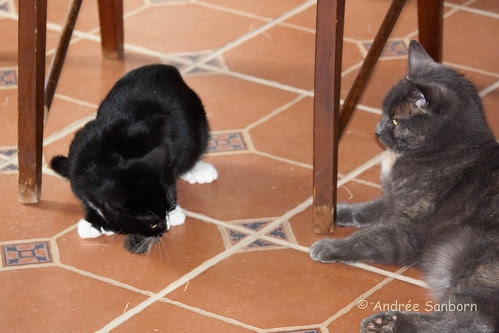 After breakfast, I cleaned the kitchen while R and John talked at the table. It had been over an hour since Oscar took the mouse from Pansy but he was still tossing it high in the air and leaping about the kitchen. Soon Oscar became quiet, so I went to see what he was up to (quiet kittens, like quiet children, need to be checked on). Oscar was crouched in the dining room — eating the mouse. In fact, he had eaten the entire head and shoulders. How proud I was of him! I called out to the men at the table, and John, equally proud, interrupted his conversation to watch Oscar. Our boy was going to be a great hunter!

R had to leave then. Oscar ate the entire mouse except for the read end and tail. R has not returned for another breakfast.