Misidentification or How We Spend Our Winter Evenings 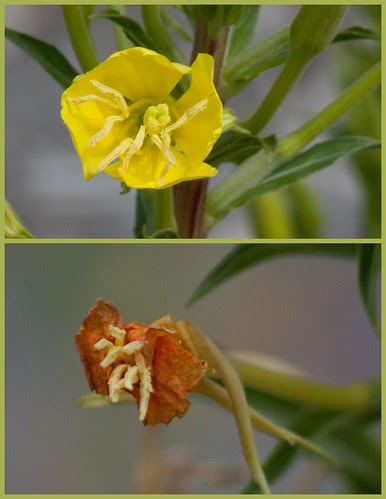 I recently edited a batch of photographs that I took in July. When I edit the photos so long after I take them, it is often difficult to remember enough information about the day to identify the plant or animal in the shot. That's what happened with these photographs. My memory told me that a tall yellow flower was Common Mullein. But something about that rang wrong with me. I checked and confirmed that this was not Common Mullein. But what was it? John and I spent one whole evening this week trying to identify it. We searched yellow, 5 petal wildflowers in our books and on the New England wildflower sites and came up with nothing. I had already posted this collage on Google+ for my 365 Project and a couple of scientists offered their opinions, but still we had no definitive ID.

Finally after a few hours of failure, I sat in front of the photographs in dejection. We seldom fail to identify stuff, and I knew this was not a rare flower, so why hadn't we found it? And suddenly, I saw why. I had miscounted the petals! There are only four petals on this flower! Within five minutes, I found that this is a Northern Evening Primrose. I was pretty put out by myself because now I had to re-tag all of the photos in Lightroom on my computer and on Flickr. But I was also happy that this mystery was resolved.Go to the posts on Google+ by clicking here to see the time table of the online discussion.

During our search this week for this flower, we came upon a length discussion of a topic that has baffled me for a long time: the C value that you always see in the USDA and other scientific descriptions of flora. C stands for the coefficient of Conservatism and refers to a plant’s floristic quality:

The method assigns a Coefficient of Conservatism to each native plant species based on that species tolerance for disturbance and fidelity to a particular pre-settlement plant community type. The aggregate conservatism of all the plants inhabiting a site determine its floristic quality. Refer to Swink and Wilhelm (1994) for a thorough discussion of the method and how to calculate a Floristic Quality Index.

The concept of species conservatism is the foundation of floristic quality assessment. Each native species is assigned a coefficient of conservatism (C) following the methods described by Swink and Wilhelm (1994) and Wilhelm and Masters (1995). Coefficients of conservatism range from 0 to 10 and represent an estimated probability that a plant is likely to occur in a landscape relatively unaltered from what is believed to be a pre-settlement condition. For example, a C of 0, is given to plants such as Acer negundo, box elder, that have demonstrated little fidelity to any remnant natural community, i.e. may be found almost anywhere. Similarly, a C of 10 is applied to plants like Potentilla fructicosa (shrubby cinquefoil) that are almost always restricted to a pre-settlement remnant, i.e. a high quality natural area. Introduced plants were not part of the pre-settlement flora, so no C value is applied to these.

Also certain species are known to exhibit varying degrees of conservatism over their range. For example Thuja occidentalis (northern white cedar) in southern Wisconsin is restricted to relatively few habitats and may justify a C of 8 or 9. In the north the same species is found over a broad range of natural communities and even disturbed sites, so it might justify a C of 1 or 2. For such cases an intermediate C value may be assigned. Concerns over any particular C value are usually compensated within the floristic quality assessment method since it requires the average C value of all the individual species that occur at a site.

Numerical values assigned to a particular species are based on the observed behavior of populations within a defined geographic area. As one travels away from this region these locally assigned values may be less valid. The further away one goes the more likely these values do not reflect local conditions. In addition to the Chicago Region Coefficients of Conservatism have been assigned for Northern Ohio, Missouri and Michigan.
Source: http://wiplants.org/This_Week_s_Plant/Co . .

In the winter, after a busy summer photography season, John and I usually spend our evenings identifying plants and fungi. We learn a lot and make a lot of connections about our natural world as we rifle through guidebooks and Internet posts. One year, it took four months of work to identify all of the mushrooms that I had photographed that summer! But good company and warm fires while the snow blows outside make the work enjoyable. Now we have a new topic to research on stormy winter nights: What is the mean coefficient of conservatism for Vermont? for the Kingdom? for us on our land?