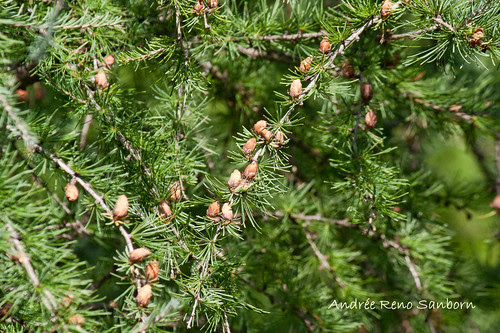 The photograph above is of the branches of a tamarack (American Larch) tree, one of my favorites. This is a deciduous conifer (a cone-bearing tree that sheds its needles). Native people used this tree to make canoes and kayaks. We are cultivating every seedling here that we find. The tamaracks glow orange in the late fall long after the other trees have shed their leaves in the autumn. Tamaracks have male and female cones on the same tree. Above you see the large female cones. It is winter now and the ground is covered with snow. The tamaracks are bare — except that they still have these cones on them. 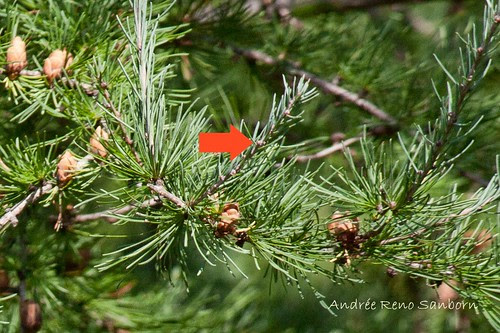 In the photo above you can see (perhaps; you may need to click the photo and see the original size on Flickr) the itty, bitty male cones.The National Phenology Network tells us on their tamarack page that

The small, yellowish male cones bear pollen and the reddish brown female cones mature and become pale brown. Cone production begins when the tree matures at about 15-40 years of age, and pollination occurs by wind.